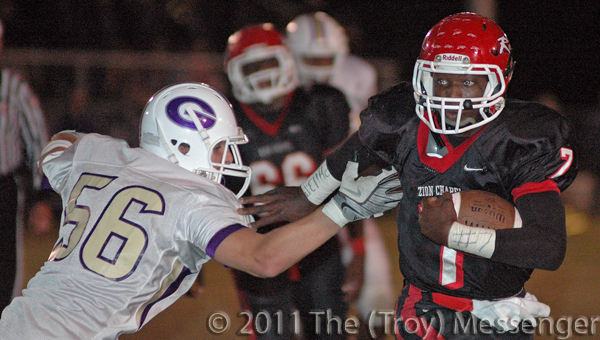 The Zion Chapel Rebels defensive coordinator had just witnessed his team clinch the second spot in 2A Region 2 with a 23-15 victory over Goshen.

“It means so much to this community,” said Bowers after the game. “Our kids have really bought in to our system and we continue to get better.”

The performance on Friday night continued to show the improvement of Bowers’ unit over their 2010 performances.

The Rebel defense averaged giving up over 30 points a game one year ago and less than 20 this season.

The defensive unit was led by senior Clint Wise, who finished the night off with 15 tackles, five for loss.”

“The coaches put me in the right position, and I was able to make some plays,” said Wise.

The Zion Chapel D came up with a huge play midway through the third quarter after the offense came one yard short of pay dirt.

Rebel defensive tackle Quilius Sanford shot the gap and wrapped up Eagle running back Reginald Foster in the end zone for a safety.

“My best friend Blake Lewis tapped me on the back before the play and said ‘I know you want to score’ and I said ‘Yea,’ so I shot the gap and got it,” Sanford said.

Zion Chapel never allowed the Eagle offense to get on track giving up only 146 yards of total offense, with 62 coming on the first drive of the game.

“My hat’s off to Coach Waters and the Rebels for the work they have done,” said Goshen head coach Bart Snyder. “We went up against a talented football team tonight, and came up short.”

Zion Chapel back LaMarcus Adair turned in another stellar performance.

The sophomore “do everything player” rolled up 119 yards on just 12 carries and scored all three Rebel touchdowns, as well as completing all but one pass for a total of 69 yards through the air.

“The run LaMarcus made early in the second half really set the tempo for us,” said Zion Chapel head coach Mike Waters. “That run and the safety there late, turned out to be huge.”

After driving the ball 62 yards on the game’s opening possession, Goshen found yards and points hard to come by.

Two punts, a fumble, and a kneel down was all the Eagles could muster to round out the first half.

The offensive woes continued in to the second half, and Goshen wasn’t able to score another TD until late in the fourth quarter.

Jerome Lawrence led the Eagles on offense scoring both of their touchdowns on runs of one and 12 yards.

Lawrence’s second score pulled the eagles within eight, but the onside kick was recovered by Zion Chapel quarterback Blake Powell sealing the win and the number two seed for Zion.

Goshen’s loss dropped the Eagles to the four seed and they will travel to Skipperville for another game with G.W. Long. Long beat Goshen 48-20 in week one.

“We had a rough night over there earlier this year,” said Snyder. “I feel that we are a much better team than we were then, but I’m sure Long is as well. We will continue to get better.”

Goshen travels to Providence Christian in Dothan in week ten before the play offs begin.

The Rebels will host a playoff game for the first time since 1991, with a match up with Barbour County.

The Jaguars lost a tiebreaker to Providence Christian to get the three seed.

“We like playing here at home, and the kid’s hard work has paid off,” said Waters.

Zion hosts Ariton in the regular season finale next Friday.