BRUNDIDGE — The sounds of cheering fans and air horns could be heard for several blocks around Bulldog Stadium for the first time this season.

The Pike County High School Bulldogs used a strong rushing attack and great red zone defense to come away with a hard-fought 14-7 win over the Geneva Panthers in the season finale here Friday night.

With the win, the Bulldogs (1-8) snapped a 12-game losing streak dating back to last season. The last time Pike County won a football game before Friday was on October 1, 2010 against Opp.

Holland said the Bulldogs showed plenty of tenacity with only 16 players dressed out due to injuries in coming up with the win.

“ It means a lot to me and the players,” Holland said. “I know the season didn’t turn out the way we liked it. But I’m proud of the guys for sticking with it.

“The seniors have been through a lot with the different coaches. But I’m proud of the way they finished the season doing their very best.”

The story of the game was Pike County’s red zone defense. The Bulldogs kept Geneva out of the end zone four times in five trips past the Pike County 20-yard line.

Late in the first quarter, the Bulldogs started a drive at their four-yard line after forcing Geneva to turn the ball over on downs. Sophomore Raheem Pearson broke a 43-yard run before ripping off a 53-yard jaunt for a touchdown. The missed two-point conversion left the Bulldogs with a 6-0 lead at the 37.5 second mark of the first quarter. It was the time Pike County had led in a football game since the season opener against Notasulga.

Following a short Geneva punt, Pearson brought the Pike County fans to their feet with a 58-yard scoring run thanks to some great blocking by the offensive line. The successful two-point conversion extended Pike County’s lead to 14-0 with 9:35 left in the first half.

Pearson finished the game rushing nine times for 175 yards and two touchdowns for the Bulldogs.

Geneva (1-8) scored its only touchdown in the final quarter on a fourth-and-goal 16-yard pass from Jordan Smith to Marcus Wilson.

The Panthers had one last chance to win the game when they moved the ball to midfield in the closing seconds. However, Tyshin Dawson sacked Smith forcing a fumble. Bishop Caple recovered to help the Bulldogs preserve the win. 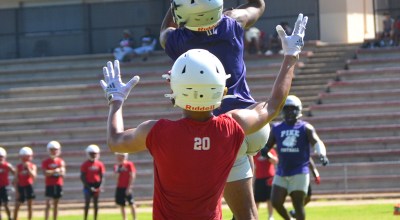