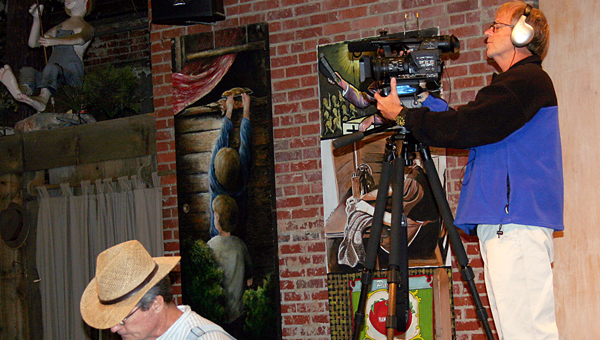 Weekly television show Absolutely Alabama was in town on Wednesday to tape a segment about Brundidge. Above, photographer Mike Tucker tapes a rehearsal of "Come Home It's Suppertime." (Photo/Jaine Treadwell)

Probably the biggest and best compliment the We Piddle Around Theater has ever gotten came from master storyteller Andy Offutt Irwin.

“The We Piddle Around Theater is what the Cracker Barrel tries to be but it can’t. This is real,” Irwin said.

Brundidge prides itself of being a real hometown community and works diligently to keep it so. And, it’s nice when people notice, said Lawrence Bowden, president of the Brundidge Historical Society, sponsor of the annual Peanut Butter Festival and a variety of events at the We Piddle Around Theater.

So, when the city was chosen to be featured on the popular weekly television show, “Absolutely Alabama,” that compliment ranked right up there with what Irwin had to say about “real things,” said Bowden, who is also a member of the Brundidge City Council.

“It’s quite an honor to be featured on ‘Absolutely Alabama’ because we feel like Brundidge is hometown Alabama,” he said.

“The show is shown state wide, except in Mobile, and we do a lot of different stories,” Hunter said. “We are often asked how we get the stories and I like to say that we stop the truck and ask.”

Hunter said there are good stories everywhere and Brundidge has quite a few to tell.

“In fact, he told me that he had more material than he could use,” Bowden said, laughing. “What we did was showcase all that we do here in Brundidge, beginning with the Peanut Butter Festival, which is a harvest and heritage celebration, on the last Saturday in October.”

The Peanut Butter Festival attracts thousands to the downtown every year but it’s just one of many events and activities that make Brundidge unique.

“We have Alabama’s Official Folklife Play, “Come Home, It’s Suppertime” in November and again in the spring. And we have several storytelling events at the We Piddle Around Theater throughout the year,” Bowden said. “The Brundidge Business Association sponsors the annual Independence Day and Christmas parades and an arts and crafts show in the spring. The Pike County Chamber of Commerce has a satellite office at the Johnston Mill, which is listed on the Alabama Register of Historical places. So, there’s a lot going on in Brundidge throughout the year. We have many things that make us unique.”

The “Absolutely Alabama” segment featuring Brundidge is scheduled to be shown at 6 p.m. Friday on Channel 12. It will also be seen across the state.