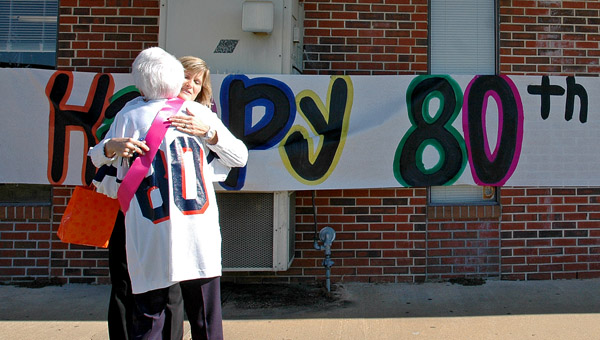 So it must be so.

And, if there were any Doubting Thomases, they weren’t around Thursday as the entire CHHS student body and faculty gathered in the school’s courtyard to wish “Wag” a happy, happy 80th birthday.

Prior to the gathering of students, faculty members surprised Wagoner, who is senior sponsor and Yearbook advisor, with a birthday cake and the coaching staff gifted her with a No. 80 CHHS football jersey. Coach Fountain said not to be surprised to see No. 80 on the field tonight.

And Wagoner has been going deep for many years at CHHS. Deep in the hearts of all the students she has guided, inspired and chewed out from time to time.

“Betty Wagoner was here when the concrete foundation was poured,” Fountain said, with a smile. “She has watched the school grow and she relates as easily to the kids these days as she did to the ones 40 years ago. She loves the kids and they love her. She can be tough, very tough, but the kids respect her and appreciate her because they know she truly cares about them.”

Helms, who “served under Wagoner” as principal, said that he has never seen a person who has the rapport with students that Waggoner has.

“Betty Wagoner is completely dedicated to the students,” he said. “She has a unique relationship with the students — every year. It doesn’t matter what year, this year or 10 or 20 years ago, she relates. That’s amazing.”

Helms said the reason that Wagoner relates so well is that she is genuine and honest and she tells the students like it is.

“And, that may not be what they want to hear but that’s what they get,” he said. “She taught me how to deal with students. She believes in giving them direction and then letting them do the rest – in letting them experience success or failure and that’s just as effective now as it was 40 years ago.”

Dr. Boyd English, CHHS principal, said that when he came to CHHS this school year, he never expected to find anyone like Betty Wagoner.

“At any school, there are usually three, maybe four, teachers who are the backbone of the school but Betty Wagoner is an such integral part of this school. She is Charles Henderson High School.”

English said what impresses him most about Wagoner is her pride in the school and her passion for the students.

“She loves the school and she loves the kids,” he said. “She is all about the kids. She is very genuine and she has a heart of gold. Betty Wagoner is a good example of what we all try to be. She means everything to this school.”

Always modest and content to stand in the shadows, Wagoner said that she is going to “kill” English for his letting the faculty and students make a big deal out of her birthday.

“It’s because of these young’uns that I get up and get out every morning,” she said. “Staying active and involved is what keeps me going. The students have always been respectful of me.” She paused a minute. “I’m not good at saying things – unless I’m mad. Then I can say what I want to say.”

Wagoner didn’t have to say much Thursday, but her feelings showed, as she accepted hugs and well wishes. She was in her element and exactly where she wanted to be. That was at CHHS and with her young’uns.

Helms watched as “Wag” exchanged laughter and barbs with her young’uns.

“She loves them but she’s tough with them,” he said. “She tells them like it is, not what the want to hear. She doesn’t sugar coat anything.”

Wagoner has her own way of doing things and some of those ways are a bit unconventional.

“I tell her all the time ‘You just ain’t right!’ and she’s not but she sure is special,” Helms said with a smile. “She’s very special to all of us.”