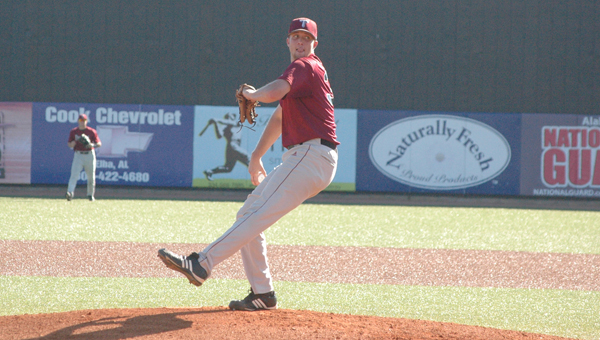 For the fifth consecutive year, the Troy Trojans hosted the Ontario Blue Jays in a fall tune-up.

The Blue Jays are comprised of high school players who travel across United States during the fall playing the likes of Troy, Florida State, and Central Michigan.

A five run third inning helped lead the Trojans to a 12-2 victory in the first game of a double-header.

Ontario jumped out to to an early lead as Kyle Hann hit a solo homerun to right field in the top of the first inning off of Troy starter Jimmy Hodgkin.

The Trojans would respond with three runs in the bottom of the first. Tyson Workman and Josh McDorman singled before a dropped fly ball off the bat of Boone Shear scored Workman. McDorman scored on a ground out by Logan Pierce. Catcher Brandon Brown’s infield single would score Shear to cap the inning.

Hodgskin would work three innings allowing the one earned run with four strikeouts.

In the third, Jakob Nixon led of the inning the with a solo shot to left field. McDorman followed with a walk before Shear doubled him home. Brown would provide a sacrifice fly to plate Shear. Austin Golden singled to score Chase Mathis to give Troy a 8-1 advantage.

The Trojans would add one in the fourth on a McDorman homer and three more in the sixth thanks to a solo homerun by Pierce and a two-run blast from Danny Collins.

The Blue Jays tacked on a run in the seventh to cap the scoring, 12-2.

Workman, McDorman, Brown, and Collins would all finish with two hits each.

Troy struggled to score runs in game two but were the beneficiaries of solid pitching as the Trojans defeated Ontario 2-1.

Logan Pierce homered for the second time on the day in the second inning to give Troy a 1-0 lead.

The Blue Jays answered in the third. Rahul Badve doubled to lead off the inning and with two outs Christian Hammerl singled him home to knot the score.

Relievers A.J. Howard, Thomas Austin, and Tyson Workman would hold the lead for the Trojans. Howard struck out three batters in his two innings of work.