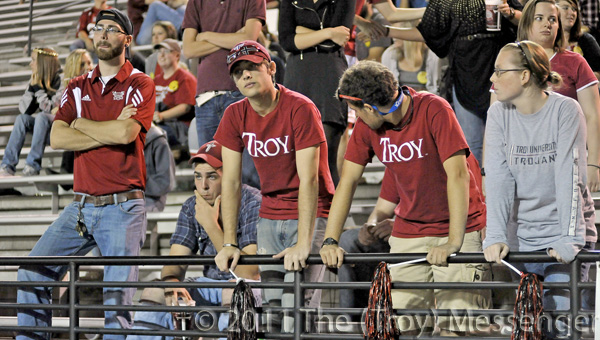 Coming into Saturday, Troy was 21-2 at home since 2007. Louisiana-Monroe put a slight dent into that record as they downed Troy, 38-10.

Troy could only produce 126 total offensive yards and quarterback Corey Robinson was held to a career low 129 yards passing.

The offensive output was the lowest by the Trojans since Florida slowed them to only 139 in 2008.

Robinson finished 19-for-32 with two interceptions. Oddly, the only other time Robinson failed to throw for at least 200 yards in a conference game was against ULM last season when he passed for only 167. 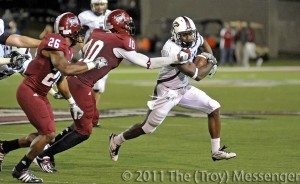 Troy posed the first scoring threat by either team. With less than two minutes remaining in the opening quarter, Robinson completed a pass to Chris Anderson for 27 yards to move to the ULM 28. Two plays later, Robinson under-threw a receiver near the Monroe sideline and was intercepted at the 18-yard line ending the drive.

The game would remain scoreless until late in the second quarter when Michael Taylor gave Troy a 3-0 lead on a 20-yard field goal.

Monroe (2-4, 1-1) took over at their 25-yard line with just over a minute remaining in the half. Quarterback Kolton Browning completed passes of 21 and 14 yards to move ULM to the Troy 17. Justin Manton was good on a 34-yard field goal to tie the game as time expired.

Things looked to turn around for Trojans in the third quarter. After the offense went three-and-out, Troy’s punt hit a Monroe player and was recovered by the Trojans at the ULM 33.

The Trojans used a little trickery to try and gain some momentum. Jamie Hampton replaced Robinson at quarterback and slipped a pass to B.J. Chitty on a swing route. Chitty then returned the throw to Hampton near the Warhawk sideline. A convoy of blockers helped Hampton gain 11 yards to the ULM 22. Three plays later, Shawn Southward walked into the endzone on an 11-yard run. Taylor’s extra point gave Troy a 10-3 lead.

The Warhawks answered on their ensuing drive. Browning completed a 49-yard pass to Tavarese Maye to the Troy 3. Jyruss Edwards would score on a 1-yard run. Monroe’s extra point attempt went array and the Warhawks were left with a one-point deficit, 10-9.

After another one of Troy’s six three-and-outs for the day, Browning hooked up with Maye again this time on a 38-yard scoring strike to hand ULM a 15-10 advantage.

Troy would fumble the ensuing kickoff an the Warhawks would capitalize with a 13-yard Browning to Colby Harper pass and catch. ULM would lead 22-10.

“I thought we played pretty well in the first half,” linebacker Xavier Lamb said. “The second half they got us on a lot of big plays.”

ULM would out-gain Troy 126-32 in total offense the third quarter. 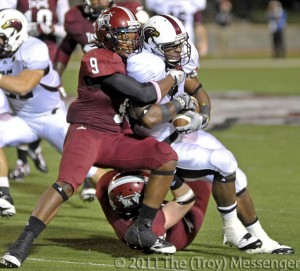 The Warhawks would add to their lead early in the final frame on a 1-yard passing score.

Later in the quarter, a high snap on a punt forced Will Goggans to toss the ball out of th back of the endzone for a safety making the score 31-10.

Troy would hold Monroe and force a punt giving the Trojans good field position at the Warhawk 49. Robinson’s first pass attempt went through the hands of his intended receiver and was intercepted by Isaiah Newsome.

Another ULM score midway through the fourth would ice the game.

“It’s disappointing,” Blakeney said. “We’ve certainly got some work to do.”

The 28-point deficit was the most in a home loss by the Trojans since a 38-3 loss to Jacksonville State in 1989.

Troy will have 10 days to prepare for Florida International on Oct. 25. The Tuesday night game will be nationally televised on ESPN 2.