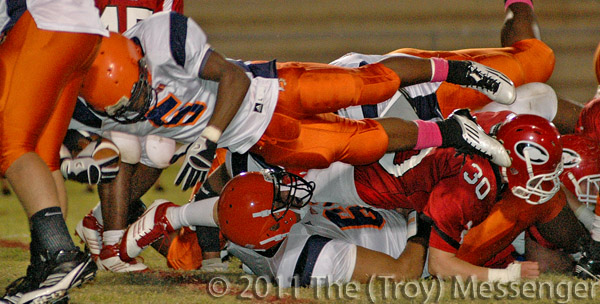 Charles Henderson High School's Courtney Downing (5) dives into the endzone for a touchdown during a football game against Carroll High School in Ozark, Ala., Friday, Oct. 14, 2011. (Messenger Staff Photo/Thomas Graning)

A high rate of penalties and a shaky passing game weren’t enough to keep Charles Henderson High School from clinching a trip to the playoffs with a 30-8 win over Carroll High School.

In the team’s first game since the passing away of assistant coach Tyrone Black, the Trojans played a near impenetrable defense that let the Eagles in the red zone only twice in the evening, only one of which they turned into a touchdown in the game’s final minutes.

“They listened well and did everything we asked of them,” coach Adam Helms said. “Each player did his job and played with a lot of emotion just like coach Black would have wanted them to.”

With the defense effectively shutting down the Eagle attack, the Trojans offense was free to keep the ball on the ground and run the score up.

The Trojans struck late in the first quarter on a pass from senior Joe Bradley to fellow senior Devin Davenport, giving the Trojans a lead they would not relinquish the rest of the evening.

A combo rushing attack of junior Courtney Downing and senior Stanley Crawford helped get the Trojans in the red zone again early in the second, allowing Downing to send in a two yard touchdown run.

The Trojans opened the second half in similar fashion, with Bradley connecting to Davenport again for a touchdown pass from 32-yards out, and added another touchdown late in the fourth quarter on a two yard rush by Crawford.

Add in a short field goal by senior Nathaniel Salmon, and the Trojans were easily able to secure the win.

The only point that the Eagles were able to score didn’t come until the final minutes of the game on a thirty plus yard run and a successful two point conversion.

Though the offense and Bradley in particular had a solid game, there were still some cracks in the Trojan lineup.

Penalties wreaked havoc on the Trojans, costing them a touchdown in the third quarter by junior Robert Lee, and on another occasion putting them in a first and thirty situation.

Despite the problems, the Trojans were able to bounce back from the loss of Coach Tyrone Black earlier this week and clinch a spot in the playoffs later this year.

“Considering all we’ve been through this week this was a great game,” Trojans head coach Hugh Fountain said. “We faced a lot of adversity and the players pushed through it and I’m proud of them for it.”

The Trojans will return home next week to face region foe Eufaula, a game which will determine if the Trojans get home-field advantage for the first round of the playoffs.