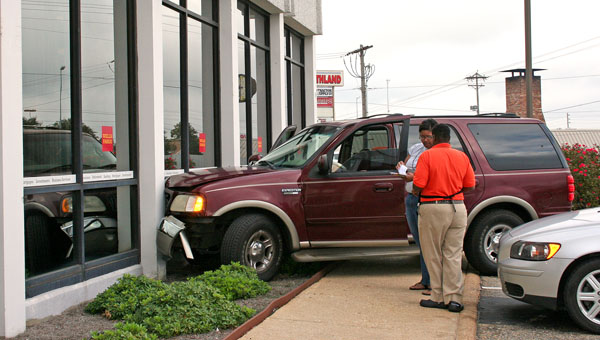 No one was injured when this SUV crashed into a bank on Thursday.

Out of nowhere came a loud “Boom!” and the next thing anyone knew, a vehicle had slammed its way into the conference room of the Wells Fargo bank in the Southland Shopping Center in Troy.

“The one-vehicle accident occurred at 9:53 Thursday morning,” Scarbrough said. “There were no injuries as a result of the accident.”

Al Jones, manager, said he was in the far end of the building and didn’t hear the noise when the vehicle hit the building. However, several customers and bank employees were startled by the loud noise.

Two bank employees were entering the conference room just as the crash occurred but were turned back by the noise and said they didn’t actually see anything. Jones said that, from what he understood, the driver of the vehicle was attempting to park but hit the gas pedal instead of the brake.