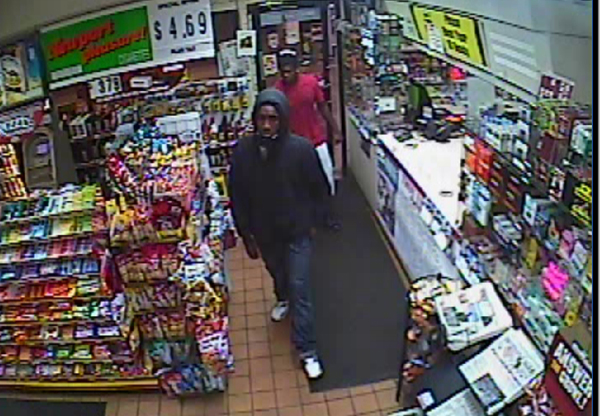 The images, captured from an in-store surveillance video, show two black males – one wearing a dark hooded sweatshirt and another in a red t-shirt – moments before they  robbed a store clerk at the ZTech on U.S. 231 near Sanders Road, police said.

“We’re hoping someone will see these images and call us,” said Sgt. Benny Scarbrough. “We’re asking the public for help in identifying these suspects.”

The early morning robbery took place about 3:30 a.m. Sunday and was the first of two robberies within 48 hours. The second took place around 11:30 p.m. Monday at the Texaco station on U.S. 87.

Police on Tuesday said one of the suspects in the ZTech robbery produced a firearm and demanded the clerk give him the money in the cash register. In the Texaco robbery, a clerk was robbed outside the store at night on his way to a vehicle. A money bag and his personal wallet were stolen.

Scarbrough said Wednesday police do not believe the incidents are related.

“I’m not going to say absolutely they could not be related, but we have a strong inclination they’re not,” he said. “Right now, we’re trying to exhaust all resources in identifying these suspects.”

Scarbrough said anyone with information about either robbery is asked to contact the Troy Police Department at 566-0500 or the Secret Witness Line at 566-5555.