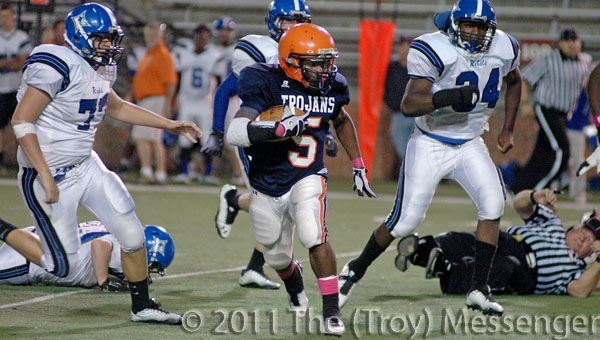 Parents, fans, and alumni came to see a homecoming show Friday night and Courtney Downing made sure they went home happy as he rushed for 269 yards and three scores en route to Charles Henderson’s 42-14 victory over Rehobeth.

The junior running back carried the ball 19 times and averaged a staggering 14 yards per carry.

The Trojans battled through first half turnovers to pull away in the second have and improve to 4-3 on the season but most importantly 4-1 in region play.

“I thought we played better in the second half,” head coach Hugh Fountain said. “You just can’t turn the ball over like we did and expect to be a good team.”

Charles Henderson handed the football to Rehobeth four times in the first half but only surrendered 14 points.

The Trojans took an early lead when receiver Robert Lee came in motion and took the reverse hand-off and scampered 31 yards for the score.

After a Detorrian Green interception, Lee would strike again. Quarterback Joe Bradley flipped a pass out to Lee near the Trojans sideline on a screen who then went 27-yards untouched to give the Trojans a 14-0 advantage.

Charles Henderson would force the Rebels to punt on their second consecutive possession but the Trojans would fumble the ball back to the visitors at midfield. Rehobeth would score eight plays later to cut the deficit in half, 14-7.

After a solid kick return to the Trojan 44-yard line, Downing gashed the Rebel defense for 56 yards on just two carries the second of which went for 29 yards and a score. The running back rushed for 156 in the first half alone.

The Trojans seemed to be taking control late in the second quarter as Bradley again found Lee this time on the far sideline. As Lee fought for yardage, a Rebel defender stripped the ball (reminiscent of George Teague’s strip in Alabama’s 1992 National Championship) and returned it down to the 2-yard line. The next play the Rebels were back in the game, 21-14.

It didn’t take long for Downing to strike in the third quarter. Rehobeth went three-and-out to open the third quarter before punting the ball only 15 yards. Downing took five consecutive handoffs to gain all 33 yards needed to the endzone. The Trojans led 28-14.

Rehobeth pinned the Trojans at their own 1-yard line but could not contain the Charles Henderson run game. Downing would break of runs of 43 and 21 yards before adding is third score in the fourth quarter, once again, on his fifth straight carry. This time from six yards out.

Downing set a career mark for rushing yards but credited his teammates for his success.

“There’s no way I could do it without our offensive line,” he said. “They opened up holes all night.”

Late in the fourth quarter, Fountain fulfilled a promise he made to his linemen earlier in the year.

“I told Reggie (Bryant) and Skylar (Sexton) that if we got a chance I’d get the a carry.”

They got their chance.

With less than three minutes remaining, the Trojans held the ball at the Rehobeth 5-yard line.

“They flipped for it (the first carry) on the sideline,” Fountain said.

Sexton won the toss and took the handoff three yards. Bryant’s turn was next but was stopped at the one. Sexton returned and finished the job with a 1-yard plunge to cap the scoring at 42-14.

The Trojans will travel to Ozark next week to take on Carroll High School.