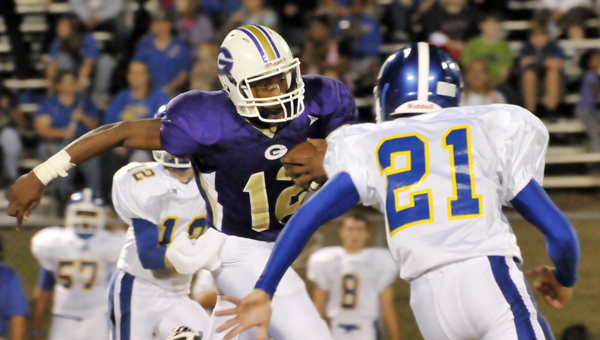 GOSHEN – A third quarter rally by the visiting Samson Tigers wasn’t enough to spoil Goshen’s homecoming as the Eagles came away with a 25-20 victory.

The Eagles, who have won five straight, struggled on offense in the first half, racking up only 54 total yards and only one first down, and no complete passes from quarterback Jerome Lawrence.

Things were a little more promising on defense, with a fumble recovery in the opening minutes of play by Tyler Phillips, a blocked field goal by Brandon Alford, and two sacks for a loss by Devandrick Merritt.

It would also be the defense who put the game’s first points on the board, thanks to a 39 yard interception return by Carlton Bean in the first quarter to give Goshen a 6-0 lead.

Things began to pick up for both teams in the second half though, leading to a two-quarter dogfight that Goshen which Goshen couldn’t fully control.

Things started off promising for the Eagles, with Alford returning the opening kickoff 89 yards to make it a 12-0 game.

Samson was quick to answer with one of its own, driving the ball from their own 35-yard line and capping the drive off with a 25-yard touchdown run.

Down by only six, the Eagle offense finally woke up for the first time when Lawrence went on a 60-yard keeper to put the Eagles up 19-7.

Lawrence would score another touchdown later in the fourth on a 64-yard run, making him accountable for Goshen’s only offensive touchdowns.

“We improved in the second half,” Eagles coach Bart Snyder said. “We played much better than last week on both sides of the ball. We had a pick six, a kickoff returned and then Jerome with two touchdowns. We had a lot of great offensive stands and I’m proud of how we played.”

The Eagles brought the score within a touchdown two more times in the second half, but thanks to Lawrence’s touchdown they were able to hold them at bay and end the game after stopping an onside kick with only seconds remaining in the game.

The win gives the Eagles a 4-1 record in the region and a spot in the playoffs, with next week’s home game against Highland Home deciding where the Eagles will play the first round.

“We’re really beat up and I can’t really put what I want in there,” Snyder said. “We’ve got to get tougher and realize it’s a game of hard knocks. We’ve got Highland Home next week and they are a very, very good ball team, but I’m proud of our seniors winning homecoming it’s something they’ll carry forever.”

The Eagles will be back in action next week for the last time home for a region match up against Highland, followed by a road trip to Zion Chapel on Oct. 21.