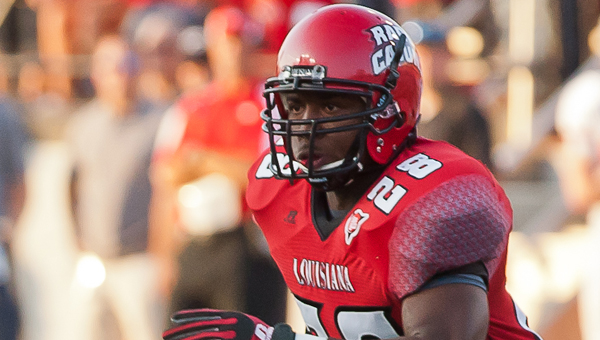 When Marcus Jackson visited the University of Louisiana at Lafayette he said he felt “at home”.

Tonight “home” is coming to him.

Troy University, which is 13 miles from Jackson’s hometown of Goshen, will pay a visit to Ragin’ Cajun country for a Sun Belt battle on the bayou.

Jackson was a star running back at Goshen High School last season and helped lead the Eagles to a 9-1 regular season mark before being ousted from the playoffs in the first round by Mobile Christian.

When time came for Jackson to take his talents to the collegiate level, one school stood out above the rest.

The former Eagle standout committed to ULL in February and once on campus quickly realized the difference in high school and college life.

“Everything is faster,” Jackson said. “ I had trouble at first with the (offensive) playbook but then it started to click.”

For Jackson however, the on-the-field requirements were not a demanding as the academic challenges.

“The biggest difference was time,” he said. “You really learn to live on your own and manage your time. There is a lot to get done so time is important.”

Jackson began camp as a running back but after issues with depth at the linebacker position, Ragin’ Cajun coaches approached Marcus about making a move to the defensive side of the ball.

“They knew I played linebacker at Goshen,” Jackson said. “I told them I was here for the team and would play anywhere they wanted me.” 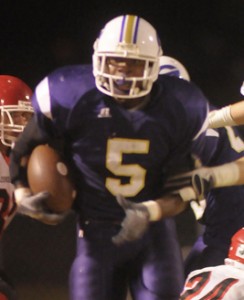 Jackson attributed teammates like middle linebacker Lance Kelley, the team’s leading tackler, and redshirt freshman linebacker Brandon “Trae” Johnson for helping him adjust both on and off the field.

“Lance sat down with me and help me through the defensive plays,” Jackson said. “Trae has been a big help too.”

Thus far, Jackson has seen playing time in all five games for ULL.

In the team’s season opener against Oklahoma State, Jackson dropped Cowboy running back Joseph Randle on third-and-two for a loss forcing OSU to kick a field goal.

“It felt good to get out there,” Jackson said. “My goal is to make as many tackles as I can and to show that no one can out work me.”

While the tackle against Oklahoma State is Jackon’s only one of the season, he did see extended playing time last week against Florida Atlantic.

“I’ve had a better chance to play (since moving to linebacker),” said Jackson. “If I would have stayed at running back, I would have probably been redshirted.”

As for this week’s game against Troy, Jackson said he’s ready to prove his worth against a school that didn’t pay much attention during his recruitment.

“I don’t think they looked at me,” Jackson said. “But I’m happy here and it has been a good fit.”

The freshman also said he was expecting several members of his family to make the trip for tonight’s game.

So what colors does Jackson think they’ll wear?

“They’ll be Ragin’ Cajun all the way.”