Board of Registrars sworn in 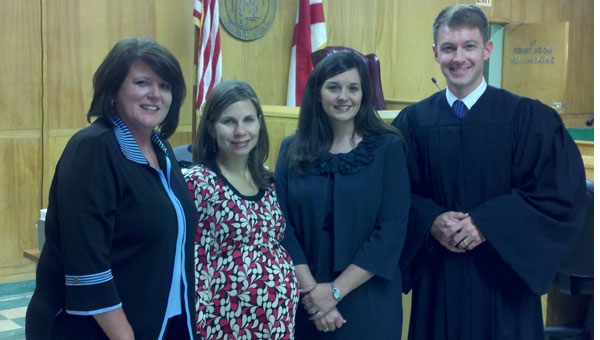 Melissa Ingram, Jennifer Deloney and Samatha Shaw were sworn in Monday as the members of the PIke County Board of Registrars by Probate Judge Wes Allen. The trio is working to improve voter registration processes in anticipation of the 2012 elections.

Monday started the new four-year term for the Pike County Board of Registrars.

All of the new appointees were sworn into office by Pike County Probate Judge Wes Allen in the main courtroom in the Courthouse. The room was filled with many elected officials and their family members

The primary mission of the board of registrars is to represent the State of Alabama, Pike County, and the governor to ensure fair and accurate elections. The Governor, State Auditor, and the Commissioner of Agriculture and Industries each appoint one registrar in every county.

The Pike County Board of Registrars is under the direction of the Chairman Melissa Ingram, who was appointed by Gov. Robert Bentley.

Ingram is also a real estate sales associate with David Adams Realty. She attended Troy University. She has worked with Auburn University and served as the Office Manager with the accounting firm of Gibson and Carden here in Troy for 12 years. Her husband, Chuck, is an Architect with McKee and Associates. They have two children, Alex, a junior at Auburn University, and Austin, a freshman at Charles Henderson High School. She and her family are members of First United Methodist Church here in Troy. Shannon S. Bryan was appointed by Samatha Shaw, state auditor.

Bryan is a graduate of Troy University, where she studied accounting. She previously worked for the State of Alabama Examiners of Public Accounts. Her husband, Kevin is an environmental scientist with URS, at Fort Rucker. They have three children, Addyson who is in the seventh grade at Pike Liberal Arts; Caden in the fourth grade at Pike Liberal Arts; and Trenton who attends Park Memorial Preschool.

Jennifer L. Deloney was appointed by John McMillan, Commissioner of Agriculture and Industries. Deloney is also employed with Decorators Two here in Troy. She received a degree in business administration and finance from Troy University. Her husband, John is a timber buyer for Posey Kilcrease. They have three children: Kate and Evan, twins who are in the second grade at Troy Elementary School; and Luke, who attends Park Memorial Preschool. They are expecting a fourth child in November. She and her family are members of Park Memorial United Methodist Church.

“The new Board Members are excited about the upcoming changes and look forward to working with each and every voter in Pike County,” Ingram said.

“And, all applications are now being scanned into the system along with a signature for comparison purposes when applying for absentee ballots, and changes have been made so that the probate judge can provide voter lists in municipal elections,” Ingram said.

The Board of Registrars is awaiting approval from the Justice Department on the new district line changes.

Once approval is received, members will be busy updating those changes and notifying the voters.

“The board has lots of work to be completed prior to the primary elections that will officially be held the second Tuesday of March 2012,” Ingram said.

“If you have any questions about your voter registration, please feel free to call the Pike County Board of Registrars at 334-566-1757 or please come visit their office located downstairs in the courthouse.”