Moore than a teammate 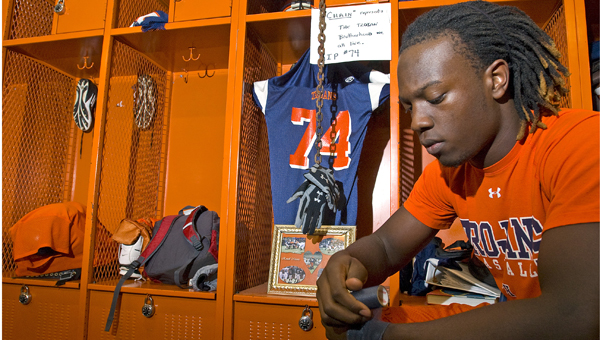 Influence, the action or process of producing effects on the actions or behavior of another person.

Role model, a person whose behavior, example, or success is or can be emulated by others.

Leadership, a process of social influence in which one person can enlist the aid and support of others in the accomplishment of a common task.

Ronnell Moore, a leader, a role model, an influence.

Is there a way to really describe it? Can you truly put into words the way a person creeps into your heart and burrows a place that will never leave?

Though they didn’t know it at the time, that’s just what Ronnell Moore did for his teammates in his time as a Trojan.

Moore, who died in a car accident June 14, left an impression that will forever change the lives of the people around him.

The 17-year-old entered his senior year looking to be not only the team’s leader but an anchor on Charles Henderson’s offensive line.

“He was a great player for us,” head coach Hugh Fountain said. “He meant so much to this team on and off the field.”

For Moore’s teammates, the thing that set him apart was his desire to make everyone around him better for the good of the team.

“He was always pushing me,” Trojan lineman Reggie Bryant said. “He wanted me to be a better person and a better player.”

Moore pushed Bryant to improve in the classroom as well as on the field.

“We wanted to go to UNA (University of North Alabama) together,” Bryant said. “I needed to get better in the classroom and he stayed on me about that.”

Bryant said his grades and study habits improved as a result of Moore’s goal for him to attend college.

Before the Pike County game, Moore’s mother, Veronica, was on hand as a honorary captain. That moment, in the team’s first game since Moore’s death, solidified the fact that they were about to play without their friend.

“Everything was really quiet,” said Hunter Steed. “It was almost like time stood still.”

Veronica also sat in her son’s place on the Trojan bench before the game wearing his home jersey.

Known as a workout warrior, Moore challenged his teammates during the offseason as well.

One of several Trojans that met on a regular basis to workout in the offseason was offensive lineman Cody Hill.

“We worked out everyday together,” Hill said. “If we were supposed to do 10 reps he would do 15. That really rubbed off on me.”

Moore had a sense of dedication, a self motivating factor that only select athletes have.

“We used to run to the (Troy University) lagoon everyday,” said Hunter Kennedy.

“One day he strapped on a 20-pound weight vest and ran with it on. I thought if Ronnell’s doing it, I need to do it.”

It was those types of traits that made tight end Josh Barrow look forward to playing next to his friend this season.

“I was excited to start next to him,” he said. “I think about him everyday.”

While the pain of losing a close friend sticks with Barrow the things Moore instilled in him live on.

The team has changed very little in Moore’s locker since his death. A picture with several game shots sits below his 74 game jersey. A chain with his gloves strapped to the end hangs in front symbolizing the links each player represents within the concept of one unified team.

“He was all about the team,” Barrow said. “To be the best team we can be we have to be united. We have to work together.”

With the obvious goal of winning a state title in Moore’s memory being the team’s ultimate goal, Barrow feels the way the team goes about their daily lives would make Ronnell proud.

“To see the way we treat each other, take responsibility, and work together would really make him proud.”