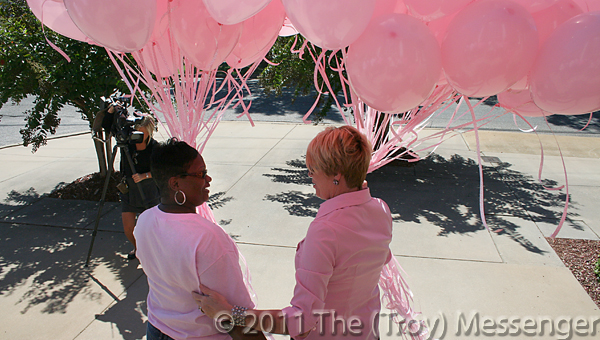 Above, Troy employees Mary Smith and Pam Nix share a moment before releasing dozens of pink balloons on the steps of city hall Monday as part of the city’s participation in Breast Cancer Awaress Month. Nix and Smith are both breast cancer survivors, and they have willingly shared their stories and their support with other men and women who have faced cancer. (Photo/Jaine Treadwell)

The City of Troy kicked off Breast Cancer Awareness Month Monday with a balloon release in honor of two city employees who have survived the disease and all of those who have battled the disease that affects about one in eight women in the United States.

Survivors Pam Nix and Mary Smith released the balloons that are designed to raise awareness of breast cancer and “show” that, with early detection and treatment, it can be defeated.

Nix is the program coordinator/adult activities coordinator for the city’s recreation department. She was diagnosed with beast cancer in May 2003.

“During a regular checkup with my gynecologist, he noticed something that wasn’t right and ordered a ultrasound,” Nix said. “I saw the ultrasound and I had had lumps and cysts before. This was different and I knew that it was cancer.”

Following surgery Nix had chemotherapy, which she said was very difficult for her.

“But that was eight years ago and it’s much better for those who are going through chemo now,” she said. “That’s because of the advancements that have been made in medications.”

Smith, who is the magistrate for the city’s court department, agreed that research has brought about changes in treatments and medications that are better for the patients.

“I was diagnosed in June 2006 and the first couple of months of chemo were bad but, after that, I had no problems,” she said.

Nix and Smith both attribute their survival of breast cancer to the generosity of the thousands who donate to cancer research.

Smith said that, because of the advances in diagnosis and treatment, lives are being saved every day and the quality of life of cancer patients is being improved.

Nix and Smith are members of a “club” that they never wanted to join but have found that its membership is made up of wonderful people. “I’m not glad that I had cancer but I know that I have been blessed because I did,” Nix said. Troy Mayor Jimmy Lunsford said that, with 12 percent of the women in the United States affected by breast cancer, there are few people who have not been affected directly or indirectly by the disease.

“Knowing this, the city’s special projects committee wanted to bring Breast Cancer Awareness Month to the forefront,” Lunsford said. “The balloon release is one way to make the community more aware of the disease and is a way to commemorate the month-long occasion. We also wanted to celebrate the victories that our two city employees have won over the disease.”

Lunsford said that he and the members of the Troy City Council are wearing pink pins to show their support of Breast Cancer Awareness Month.

Ashley Smallwood, special projects coordinator, said that, throughout October, the city will have pins to pass out to those who want to show their support of Breast Cancer Awareness month.

“We’ll also have information on the city’s bulletin board to increase awareness of the disease,” Smallwood said. “The balloon release was a great way to kickoff Breast Cancer Awareness Month and to honor Pam and Mary as survivors of the disease. The city wants to do its part as we continue the fight against breast cancer and all cancers.”