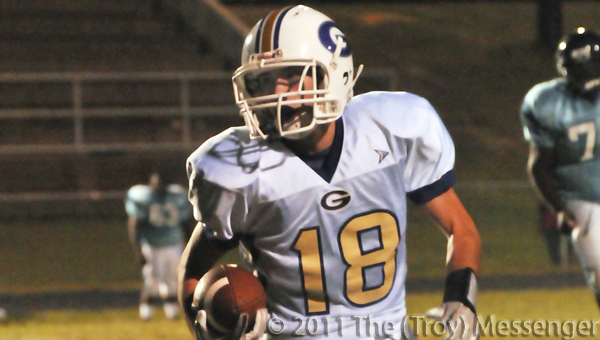 LETOHATCHEE – There is an old adage that coaches use to sum up an ugly win, “A win is a win.”

Goshen head coach Bart Snyder will take 9-0 win over Calhoun, but he is not happy about it.

“When coming off wins against New Brockton and Pike County, we just over looked them,” said the Goshen head man.

The Eagles struggled the entire night against the winless Tigers from Lowndes County, and carried just a 3-0 lead late in to the fourth quarter.

Devadrick Merritt iced the game away with less than 5 minutes to play on a five-yard touchdown run.

“Our D played well,” said Snyder. “We got some good performances from the unit, especially the linebackers.”

Reginald Foster led the way for the Eagles on offense with 164 yards on 16 carries. Merritt added 20 yards on five carries, including the touchdown.

“We just simply had a bad game offensively,” said Snyder.

Goshen will return to the friendly confines of The Eagles Nest next Friday night in another region match up, against the Samson Tigers.

Friday’s contest will be homecoming in Goshen. Kickoff is 7 p.m.