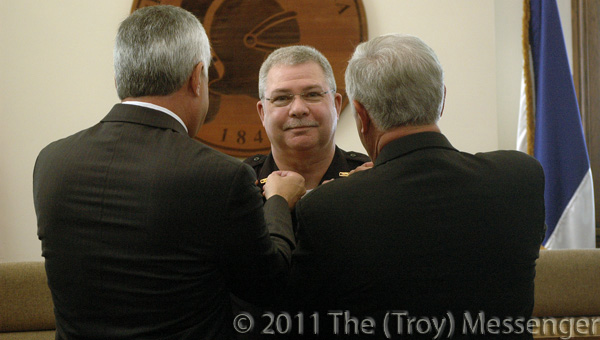 “A new day and a new beginning.”

“We’re proud of you and we’re proud for you,” Reeves told Ennis after the swearing-in and pinning ceremony Friday morning at City Hall. “You can do this and you do it well … because those who are up there with you say you can.”

Reeves’ father, retired chief Grady Reeves, and Anthony Everage, who retired as police chief on Friday, led the pinning ceremony for Ennis. The new chief was sworn in by Municipal Judge Nick Cevera with his family at his side.

“He’ll be a much better chief for all the advice he got up here during that pinning,” Mayor Jimmy Lunsford joked with the crowd. “I can’t repeat what was said.”

Well-wishers filled the council chambers, the lobby and surrounding areas at City Hall on Friday for the ceremony. Ennis thanked them all for coming and smiled as he said, “I’m nervous.”

But he was warmly greeted and congratulated by the council members.

“You know how I feel about who you and what you represent,” said Wanda Moultry. “I know you’re going to do what’s right and that’s important.”

“We’re luck to have somebody fill the shoes of our two former police chiefs,” said Charles Meeks.

And Charlie “Sarge” Dunn thanked Ennis for “having the courage to take over this great responsibility.”

After the ceremony, Lunsford said he is “very excited” to welcome Ennis as police chief. “He grew up in our department, he knows what to do. He’s been the chief of detectives and trained with the FBI academy,” Lunsford said. “He’s worked some of the really serious cases we’ve had in Troy, and he’s well-qualified.”

Ennis is originally from Brantley. He has a degree in criminal justice from Troy University. He has 28 years experience in law enforcement. He began his career with the Brantley Police Department in 1981; worked with the Brundidge Police Department from 1983-1985; and then came to Troy. He was selected in July by the city council to succeed Everage.