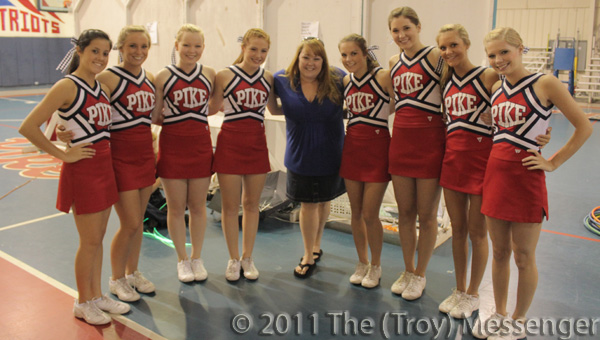 Marley Harbuck joined the PIke Liberal Arts School cheerleaders recently to film a trailer to introduce her new book, "Radiate" which was inspired by her high school battle against bone cancer and the changes it made in her life. Harbuck, a 1985 graduate of the school, now travels as a paranormal investigator and is the author of the "Ghost Huntress" series of books. (Photo/Jaine Treadwell)

That was the feeling that engulfed Marley Harbuck Gibson last week when she came “home” to Pike Liberal Arts School.

Marley is a 1985 graduate of PLAS and has fond memories of her alma mater but her feelings go much deeper than that.

In 1982, Marley was diagnosed with a rare form of bone cancer. Being an active and involved teenager, she didn’t realize the seriousness of her condition. She didn’t know until years later that there was a strong possibility that she might lose her leg to the disease.

“I just knew that I wanted to get rid of the cancer,” Marley said. “I told the doctors to take the cancer out because I had to cheer at the football games on Friday nights.”

It wasn’t quite as easy as Marley thought. Had the doctors not been able to successfully remove the cancerous bone in her left leg, she would have lost her leg.

“Thankfully,” she said, the operation was successful.

But being young, neither did Marley realize that there would be an extended hospital stay and follow-up treatments to prevent the cancer from returning.

“Lying there in bed playing canasta with my mom was not much fun,” she said, laughing. “A hospital stay is boring and my spirits needed a lift.”

“One day, the cheerleaders from Homewood High School came to my room and brought me a gift basket and visited with me,” Marley said. “And, they did cheers to cheer me up. That meant so much to me that girls that I didn’t even know would come to the hospital and cheer for me. That’s something that I’ll never forget.”

That visit from a group of cheerleaders, who showed caring for a stranger, planted a seed that has come to full blossom almost 30 years later.

Marley, who is the author the “Ghost Huntress” teen fiction series, is turning her lifelong interest in the paranormal into a fundraising project to benefit young adults who are victims of cancer.

She has established the Radiate Foundation, which gets its name from her latest book, “Radiate” which has nothing to do with ghost hunting and everything to do with her battle with and victory over cancer.

The title comes from radiation, which is so often associated with cancer treatments, and, too, from the lifting of one’s spirits when the battle is won.

The Radiate Foundation is based on the book, which is fiction but its core is Marley’s struggles and triumph over cancer.

“I realized that so much information is out there for children who are victims of cancer and older adults but not much for those who fall into the age group 12 to 25,” Marley said. “I wanted to write a book that age group could relate to. ‘Radiate’ is the story of what I went though at that time. It has family drama. There are financial difficulties and there is even an evil cheerleader. But none of that happened. That’s all fiction. But 98 percent of what I went through is absolutely true.”

Marley realized that she could capitalize on the growing interest in the paranormal to raise funds for the Radiate Foundation.

“What we, Patrick and I, have done is organize the ‘Haunted Highway Tour,’ which is a non-profit venture,” she said. “When we go on tour into different cities to speak and conduct investigations, we will offer booths for vendors with a portion of their sales and ours going to the Radiate Foundation. Those funds will be used in our ‘Lifting Your Spirits’ project where people can contact the foundation and we’ll send a goodie basket, much like the one that was given to be by the Homewood High cheerleaders 30 year ago, to their loved one who has cancer. The baskets will be delivered by a group of cheerleaders from that community who will ‘lift their spirits’ by cheering for them.”

Marley said the origin of the Radiate Foundation is at Pike Liberal Arts School and that’s where she wanted to kickoff the project that is very special to her.

She contacted school officials and received permission to film at PLAS for the book trailer for “Radiate.”

“A book trailer is much like the previews that you see when you go to a movie,” she said. “It tells about the book in an effort to generate interest in it. The footage that Patrick shot at PLAS – and there was a ton of it – will be edited down to two minutes for the book trailer for ‘Radiate’ and it will feature Pike Liberal Arts School in Troy, Alabama.

“I’m excited that the book trailer was filmed at ‘my’ school.’ The names and faces of the students are different but the spirit and caring are the same. No one will ever know what it meant to me to be so accepted and so loved while I was going through cancer treatment.”

At that time, Marley said the members of the Patriot football team thought that it would be macho to shave their heads. It just so happened that, at the same time, she lost her hair.

“People from other schools thought that it was so cool that a cheerleader had shaved her head, too. For me, it was just cool to be a part of a school with such a big and loving heart,” Marley said. “I hope that comes through in the book trailer because Pike Liberal Arts has not changed. The administration, faculty and students welcomed me back with open arms. They rolled out the red, white and blue carpet for me. It was good to be back home.”