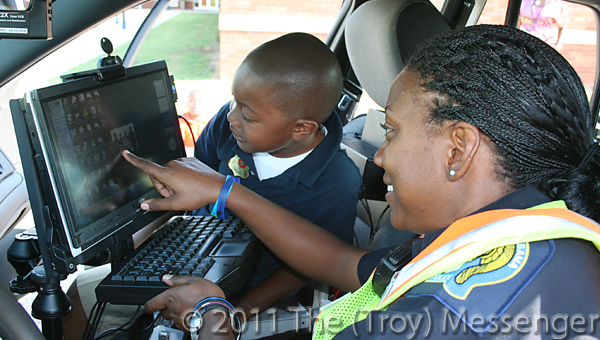 Ask the children who have attended the Hank Jones Early Childhood Center in Troy what their favorite memory of kindergarten is and you’ll mostly likely get the same answer.

“Community Helpers Day is what the children remember most,” said Tracy Huner, kindergarten teacher. “You can ask the fifth graders and they will tell you that and, probably older students, too.”

Community Helpers Day is an annual culminating event for the kindergarten unit that teaches the children about the people whose job it is to take care of them, their families and everyone else in the community.

Huner said young children see community helpers at work but don’t realize the important roles they play in their lives.

Huner said that all children are fascinated by the fire truck and the kindergarten kids always get big-eyed when they see the “big red truck.”

Most children are familiar with the fire trucks, ambulances, buses and police cars but don’t any idea about the city workers in the white bucket trucks.

“The employees with the city utilities talked to the children about safety issues,” Huner said. “They learned not to touch a power line that is down because it’s dangerous. And, they learned that the power lines overhead bring light into their homes and the electricity their mothers need to cook their supper.”

During the unit, the children learn a lot about community helpers, but it’s the hands-on experience of Community Helpers Day that really makes an impression on them, Huner said.

“Often children associate firefighters and law enforcement officers with flashing lights and blaring sirens, which is frightening to them,” she said. “The children feel comfortable talking about community helpers and flashing lights and sirens with their teachers but outside the classroom, it can be very different.”

Therefore, sometimes children are fearful of these seemingly bigger than life people,” she said.

“We want the children to be as comfortable and secure with our community helpers as they are with teachers in the classroom. When they get to meet our community helpers, it’s easier for them to understand that they are truly here to help them. That’s what Community Helpers Day is all about.”