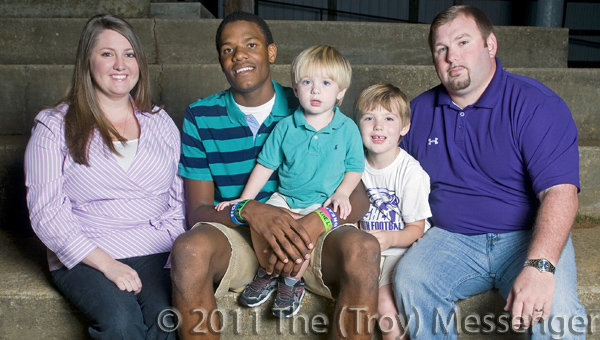 Five years ago, the last thing on Joshua Milsap’s mind was football.

One of eight children living in less than ideal conditions in Samson, Milsap met a man who would change his life.

Goshen assistant coach Pate Harrison was the head basketball coach at Samson High School when Milsap, then a seventh-grader, walked through the door.

“He tried out for the team and I don’t think he could walk and chew gum at the same time,” Harrison jokingly said. “He needed some work so we put him on the B team.”

It was that chance meeting and the interest in sports that spurred a relationship that would greatly impact both of their lives.

Two years later, Milsap was starting on the varsity team as a freshman.

“I played all the time,” Milsap said. “I still play every Sunday while the season is out.”

In 2009, Milsap was riding his bicycle to Harrison’s house when he had an accident going down a hill.

“He came in and looked like he had been in a fight,” the coach said. “He went to the hospital and stayed here for several weeks.”

Not long after that, Harrison made a decision he knew in his heart was right.

Harrison asked permission from Milsap’s mother, who gave birth to him while in prison in Massachusetts, to take full custody of the then 16-year-old.

“We signed the papers and he’s been with us ever since,” Harrison said. “He’s a super kid, couldn’t be any better.”

Milsap joined the family as the eldest of three boys. Pate and his wife Katie also have 6-year-old Kade and 2-year-old Kolt.

“Kade is a little older and remembers the whole process,” said Harrison. “Kolt just knows him as his brother.”

While at Samson, and later New Brockton ,when Harrison changed jobs, the 6-foot, 8-inch Milsap became a star on the basketball court.

“He was tall, so he had an advantage,” Harrison said. “We kept working with him on the fundamentals and he continued to improve.”

“I asked him to play (football) but I don’t think he had much interest,” said Harrison. “I told him he would have to hang around until practice was over. He told me if he had to stay he might as well play.”

The 195-pounder suited up as a wide receiver during summer practice but it was very apparent early on that more work was needed.

“He had never seen a football game much less played in one,” head coach Bart Snyder said. “Just learning the game itself was a challenge.”

When Goshen lost one of their offensive tackles for the season, Milsap, who was playing sparingly as a receiver, stepped right up to the challenge.

“We met with the players and afterwards he came up and put his arm around me and told me he wanted to do it,” Snyder said.

With only two days to prepare before playing region foe New Brockton, Milsap had to take in a lot of information.

“One play he was knocked down. He grabbed the other guy’s jersey and took him down too,” Snyder said. “That was his introduction to the holding penalty.”

Milsap, who also serves as the team’s punter, has surprised his coaches as well as entertained.

In Goshen’s matchup with Elba, Milsap took the snap on a fourth-and-long.

For reasons unknown to Snyder and Milsap, the team’s punter had hurled the ball while under duress towards the Eagles gunner running downfield to cover the punt.

“Our gunner didn’t know it was a pass either or he could have caught it for a big gain,” said Snyder.

Milsap just knew he had to get rid of the ball.

The helmet in the chin drew a roughing the passer penalty and an Eagle first down.

That type of play is what both Harrison and Milsap feel he has needed to help him in life and sports.

“It has made him tougher, no question,” Harrison said.

What could be a turnoff to any other first time footballer is a reward for Milsap. The roughness of the game is something he enjoys.

“I like hitting people on the field,” he said. “But I like the team atmosphere the most. Being around these guys is great.”

Whether it’s the camaraderie or the concept of family, Milsap feels he has grown from the whole experience.

“It has been great. I couldn’t have asked for anything better.”