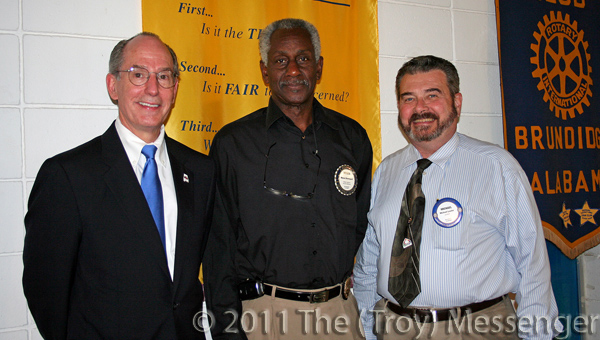 Even before Young Boozer was elected Alabama State Treasurer, he was making headlines.

Boozer, laughingly, told the Brundidge Rotarians Wednesday that, as a candidate for the state treasurer’s office, he led off the Jay Leno Show in April 2010.

“I was in bed and at 10:48 the telephone rang,” Boozer said. “I decided I would get the message in the morning.”

When morning came, Boozer had 20 telephone messages and 250 emails telling him that he had gotten a plug on the popular late-night television show.

“Someone had sent Jay Leno one of my campaign brochures and he held it put for the camera to zoom in,” Boozer said. “He said that I was probably a very qualified candidate but I had the worst name for a politician.”

Boozer said the Leno exposure was probably the best thing that had ever happened to him.

His name attracted attention all across the country. He was even interviewed by Paul Finebalm and endorsed by another candidate with a funny name.

“Krystal Ball predicted that I was going to win,” Boozer said. “I won but she didn’t win the Virginia Congressional seat that she was seeking.”

Boozer said that 11 months after the general election, he still sees political signs along the roadway.

“You might see Twinkle signs, Sparks or Strange but you won’t see any Young Boozer signs,” he said. “I had to stop putting my campaign signs up in Auburn and Tuscaloosa. They were gone in less than 24 hours to dorm rooms and fraternity houses.”

Boozer does have an unusual name – really, a funny name – but he coined a slogan for his campaign, “funny name, serious leadership.” And that’s what he told the Rotarians he brings to the state treasurer’ office.

“When I was declared the winner of the state treasurer’s office, I was overwhelmed by a feeling of humbleness,” he said. “It was a feeling that I had never experienced. And I was overcome by a huge sense of responsibility.”

Boozer said it is that humble feeling and that powerful sense of responsibility that will guide him on the “amazing personal adventure.”

As Alabama’s state treasurer, Boozer serves on 25 boards of authority and oversees $100 million a day in revenue. He depends on his background in finance and on common sense for the decisions that he has to make.

Boozer is responsible for bond management for the state, two college savings programs, “College Count is the best one out there,” the Alabama Trust Fund and Unclaimed Property with a value of about $400 million.

“One man found a million dollars that he had forgotten in Unclaimed Property and another had his gold medal from the 1984 Olympics returned to him,” Boozer said. “Unclaimed Property is what I like best about my job.”

Boozer ended his presentation with advice on the economy.

“It’s either good or bad; it’s better or worse,” he said. Boozer was born in Birmingham and raised in Tuscaloosa. He holds degrees from Stanford University and Wharton School of Business. He spent nearly four decades managing finances for firms around the country. He also served as chairman of the Board for the Alabama Shakespeare Festival and on the board of trustees for Stanford.