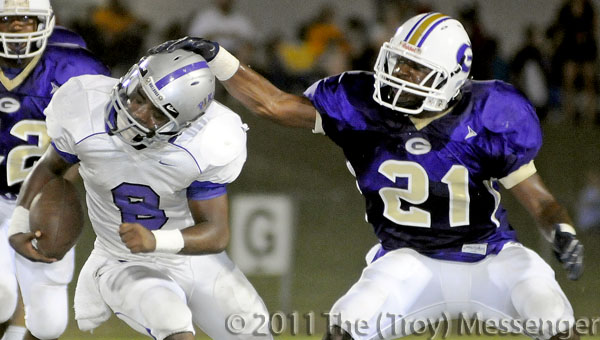 A new offense and a new coach in Fred Holland weren’t enough to keep Pike County High School from dropping to 0-5 after a 33-20 loss to Goshen Friday night.

The two teams seemed evenly matched in the first quarter of play, with big defensive stops from juniors Tehron Stallworth and Abriam McGuire forcing a punt from Goshen to give Pike their first possession of the night.

The Bulldogs (0-5, 0-3) suffered from fumbles on offense, giving the ball up twice in the first half of play and losing six yards on a recovered ball dropped by senior Tyshin Dawson.

The game stayed scoreless all the way up to the final minutes of the second quarter, when Goshen cashed in on Jerome Lawrence’s 15-yard touchdown run to go up 7-0.

Goshen (3-2, 2-1) would follow up with another touchdown with only 12.5 seconds left in the half, thanks to a 37-yard run by Lawrence to end the half with Goshen leading 13-0 after the extra point was missed.

“We had to see what was going on because we didn’t know,” Goshen head coach Bart Snyder said. “We had to work on things make adjustments, Holland’s got a great group and they play hard. We really didn’t know what to expect coming in.”

Pike County was only able to rack up 68 yards of offense in the first half, with 49 of that coming from senior running back Dominique Mills.

The Bulldogs were also weak in the passing game, with senior Marlon Meadows unable to complete any of his attempts.

Goshen managed 149 yards in rushing offense, along with a scant 27 yards in passing.

The Eagles broke loose in the second half, recovering a fumble and burning almost five minutes off the clock before the Bulldogs took over after a fumble recovery on their own eight-yard line.

Ball back in hand, the Bulldogs put their first touchdown on the board after a 78-yard run by sophomore Raheem Pearson.

The Eagles were quick to respond and on the following kickoff return senior Brandon Alford returned the ball 83 yards for another Eagle touchdown, making it a 20-6 game.

“These guys are young and they have never really played but they are getting better,” Snyder said of his sibling kickers Daniel and Steven Macias. “We’re getting to where we can tell them where to kick it and they’ll kick it there.”

The Eagles opened up the fourth quarter with another touchdown run, this one for 27 yards, and a successful extra point to go up 27-6.

The touchdown was followed almost immediately by a Jerome Lawrence interception return for a score that gave the Eagles a 33-6 lead, though the Bulldogs were able to block the extra point attempt.

The Bulldogs fought back throughout the remainder of the game, driving the ball from their own 40-yard line to the one, before sending Meadows in for the short touchdown to make it a 33-12 game.

With only three minutes left, the Bulldogs managed to recover a fumble on their own 36, which they eventually turned into a 25-yard touchdown pass into the hands of senior Quadry Greasham.

A successful two point conversion run by Mills put the score at 33-20 with only 27 seconds left, allowing the Eagles to take a knee and end the game with a win.

Next week both teams will go on the road for region games, with Goshen taking on Calhoun and Pike County facing off against Opp.