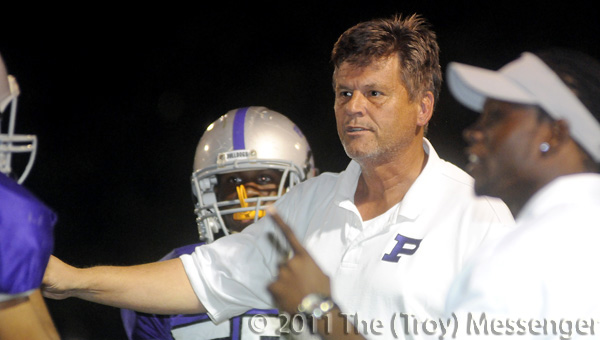 Pike County High School head coach Rodney Dollar talks with his players during a time out during a football game against Abbeville High School in Brundidge, Ala., Friday, Sept. 16, 2011. (Messenger Staff Photo/Thomas Graning)

Dr. Mark Bazzell, superintendent for Pike County Schools, said the decision to place Dollar on leave was what “we believe to be in the best interest of the program.”

Dollar said he met with both Dr. Bazzell and Pike County principal Willie Wright on Monday and said the decision was made to place him on leave.

“He’s been on staff for several years and was defensive coordinator for the last three state championships,” Bazzell said. “He knows the program and will run a tight ship”

While Bazzell would not divulge what prompted the decision, Dollar said a health related issue required his attention.

“Physically, I can’t give the kids the time they deserve,” Dollar said. “It’s not fair to the kids or the program so I’m going to take the time to get back to 100 percent.”

Dollar came to Pike County from Tallassee High School where he led the Tigers to three consecutive playoff appearances from 2008-2010.

Dollar has had a rough run at Pike County, however. The team is 0-4 for the first time since 1998.

“They are a bunch of great kids,” Dollar said. “They have a lot of ability and we have to do what is best for the kids.”

Holland was a player for the Bulldogs 1988 state championship team as well as defensive coordinator for Wayne Grant on the 2003, 2005, 2006 title squads.

The new coach is in his 17th year at Pike County High School and says that not all things will change on the field.

“We have a lot of good things in place here and want to improve on that,” Holland said.

While their is no timetable for Dollar’s return, Wright said the important thing is the coach’s health.

“We love coach Dollar and want him back to full health.”

Wright went on to say that the decision had no relation to the team’s play on the field and was strictly an administrative agreement.

The Bulldogs will travel to Goshen Friday for a 7 p.m. kickoff.