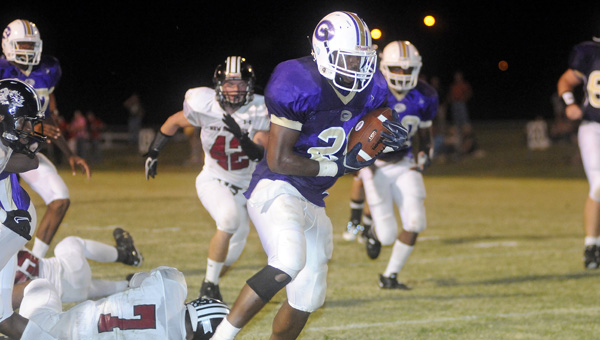 Goshen is the hot team in the area after two straight region wins and looks to continue their streak against non-region foe Pike County on Friday.

One looming issue is that Goshen’s coaching staff has no idea what they’re preparing for.

Fred Holland takes over as interim head coach for an ailing Rodney Dollar which leaves the Eagles with limited knowledge of what to prepare for Friday night.

“We don’t know what we’re going to see,” head coach Bart Snyder said. “We know what they have been doing but that’s probably not what they will do.”

Goshen defeated both Red Level and New Brockton after falling in their first two contests to G.W. Long and Elba.

The Eagles played a solid second half last week against the Gamecocks to come away victorious, 35-28.

Goshen wasted no time evening the score on their first possession of the third quarter thanks to a 24-yard Reginald Foster run.

New Brockton held a 28-27 lead until Foster broke free once again, this time for a 63-yard scoring sprint to secure the win.

Goshen is a mere 2-13 all-time versus the Bulldogs but has won two of the last three meetings.

Game time from the Eagles Nest is 7 p.m.