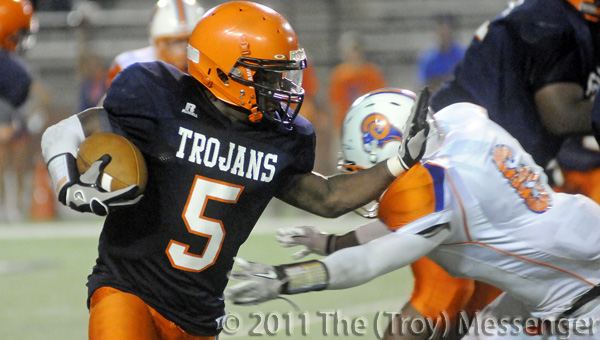 All it took was a blocked PAT attempt late in the fourth quarter to turn what could have been a region victory for Charles Henderson High School Trojans into a defensive struggle that resulted instead in a 21-20 loss to Valley.

After a short touchdown run on fourth down by junior Courtney Downing to give the Trojans a 20-14 lead over the visiting Valley Rams, it was up to senior kicker Nathaniel Salmon to bring in the PAT to put the Trojans safely in the lead.

But a strong defensive push by Valley led to a blocked kick and a long defensive series that played out across the remaining three minutes of the game.

Starting on their own 35 after the kickoff the Rams slowly chipped their way into Trojan territory before ultimately completing a 14-yard pass to put them on the two yard line.

After the kick return the Trojans only had time for one play with four seconds remaining, a play which resulted in a game ending interception on long pass by senior quarterback Joe Bradley.

“I think we played hard but in the clutch we failed to execute,” Trojans head coach Hugh Fountain said. “We missed an extra point which should have been pretty simple and we just didn’t do what we needed to do in the clutch.”

The Trojans showed promise early in the game, putting a touchdown on the board after less than two minutes of play.

The score came from the hands of senior Devin Davenport, who caught a pass from Bradley to give the Trojans an early lead.

The Rams had a few tricks out of the gate as well though, and after a successful fake punt pass they found themselves in Trojan territory, where they would eventually tie the game on a pass of their own.

On the very next kickoff return, junior Detorrian Green returned the ball 81 yards to put the ball in the red zone on the 5-yard line.

The Trojans didn’t waste their chance, and utilized junior running back Courtney Downing to run a touchdown in to again take the lead while still in the first quarter.

The two teams traded possessions throughout the remainder of the half, with the Trojans attempting and missing a field goal to close out the second quarter.

After getting the ball back in hand, the Trojans burned away most of the third quarter by keeping the ball on the ground, but gave up the lead with only a couple minutes left in the third after a 26-yard touchdown pass by Valley.

Tied at 14 all the game turned into the defensive struggle that eventually resulted in the 21-20 loss for the Trojans.

“This was a game we could have and should have won,” Fountain said. “We’ve got a one week break in the region so now we have to go back and learn what it means to win. Give Valley credit they played a good game, and we’ve just got to work harder and come back out next week.”

The Trojans currently have a 2-2 overall record and a 2-1 region record as they prepare to go on the road to face Greenville in a non-region matchup followed by another road game against region foe Russell County on Sept. 30.