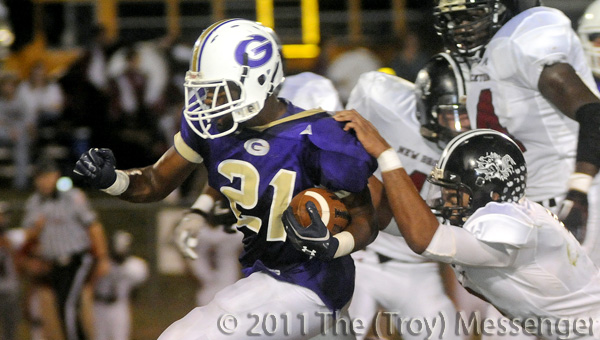 GOSHEN – It was a picture perfect, high intensity Friday night under the lights at the Eagles Nest as Goshen topped New Brockton, 35-28.

New Brockton came out tough early in the game with a 56-yard drive in their first series led by their powerful dual threat quarterback. However, after ten plays of being pushed back the Goshen defense would make a stand stopping the Gamecocks on fourth down in the opening drive.

The Goshen offense struggled in their first drive only rushing nine yards before having to punt the ball away.

It would be New Brockton who would find the end zone first on an 11-yard touchdown run by their running back on the seventh play of their second series. The snap on the point after attempt went over the place holders head on the failed try resulting in only a 6-0 lead for the Gamecocks.

Both teams struggled in their special teams efforts as Goshen would later go on to miss a PAT as well.

The Goshen offense quickly found their rhythm in the game as running back Reginald Foster would score on a 28-yard touchdown run after a fumble recovery by the Eagles defense.

After a quick onside kick by Goshen the Gamecocks answered back with a lateral pass back to the quarterback for a 51-yard touchdown. The Gamecocks would also complete the two point conversion making the score 14-7 at the half.

Goshen made some adjustments at half time that they quickly put into play scoring on a 24-yard touchdown run by Foster in the Eagles first series of the second half.

Both teams’ offenses seemed to be working harder in the second half as each team would quickly respond to a score with another touchdown.

On the first play of the fourth quarter, Brandon Alford scored on a 58-yard touchdown run giving the Eagles a 27-21 lead over the Gamecocks. However, the pivotal point in the game came as the Eagles went for to sneak in an onside kick but failed to recover thus giving the Gamecocks prime field position to answer back.

After being stopped again by the Goshen defense on fourth down on the opposing 21-yard line, the Gamecocks took the ball back in Eagle territory on a Goshen fumble. New Brockton would go onto score on an 18 yard touchdown run only two plays later giving them the lead 28-27.

Goshen looked to be in more danger as they gave up another fumble on the next drive. The Eagle defense answered the call once more holding the Gamecock attack and causing a turnover on downs.

Goshen’s running back Reginald Foster showed great determination and power running as he ran for a 63-yard touchdown to secure a 35-28 lead for his team. Foster would go on to run for 208 total rushing yard on the night (161 yards in the second half) and three touchdowns.

“Reginald is an outstanding athlete, but it’s not just that and Reginald knows that it was a team effort,” said head coach Bart Snyder.

Foster’s performance was due to hard work up front in the line, especially by right tackle Joshua Milsap who had been moved from wide receiver to right tackle in just this past week to fill a need that the team had in the depth chart.

“He stepped in and played right tackle and played a heck of a game and did exactly what we needed of him,” Snyder said. “I am very proud of him and the things that he has done here.”

New Brockton’s back-up quarterback would to enter the game on their last two offensive series to replace their starting quarterback who was injured on the previous offensive drive. However he would throw only one completion on six attempts.

The Goshen Eagles would go on to claim a determined 35-28 victory over the New Brocton Gamecocks. Goshen now improves to 2-1 on the season.

“We played with the desire and the heart that we are capable of playing with,” said Snyder. “Our guys did a good job that even though we were down a few times, they never quite. They kept blocking, kept pushing and we grew up as a team and we showed people that we are back playing Goshen football.”

The Eagles now turn their attention towards rival Pike County who they will face at home on September 23.

“We’re going to enjoy this win this week, but we have a big game next week that we have to start getting ready for,” Snyder said.