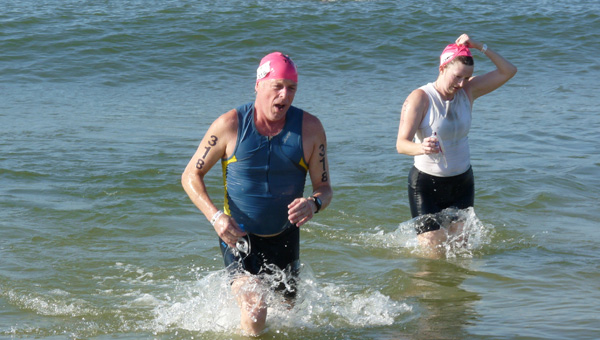 District Judge William Hightower, left, competes in a recent triathalon. The local judge says he enjoys competing in the contests, which require participants to swim, bike and run. His goal, he says modestly, is "to finish and not finish last." (Submitted Photo)

Judge excels on the bench and in triathalons

District Judge William “Bill” Hightower is a distinguished judge. He is the longest serving district judge in the state and he has never had a decision reversed in an appeal on the record.

His expectations as a judge are always high.

But, when he pulls off his robe and assumes his “Superman” persona, he keeps his expectations “realistic.”

Although Hightower doesn’t consider himself a “superman” most others would disagree.

By most all accounts, any triathlete is a “super” man or, to be politically correct, woman.

The judge is quick to point out that he competes “just” in intermediate triathlons, not the Iron Man Triathlons.

Both have three components – swimming, cycling and running. The difference is in the distance.

“In the Iron Man Triathlons, you swim two and half miles, bike 112 miles and run a marathon which is 26.2 miles,” Hightower said. “That’s much more demanding than an intermediate triathlon.”

Because an intermediate triathlon is the same distance as the Olympics, the distance is measured in kilometers.

Hightower, laughingly, said that his realistic goal for those 32 miles is “to finish and not finish last.”

So far, he’s reached his goals.

Hightower has competed in five triathlons, the most recent, the Brett Robinson Alabama Coastal Triathlon at Gulf Shores on September 10.

“I finished and I wasn’t last,” Hightower said.

And, had it not been for a hole in the road, Hightower would have had a much better finish.

“I was four miles into the race when I hit a hole and the tire went flat,” he said. “I didn’t have the tools along that I needed to fix the flat and no one is allowed to help you. So, the only thing that I could do was keep riding.”

Hightower said the rubber on the tire cushioned the rim and it never hit the ground.

“I never rode on the rim but I rode on a flat tire for the last 21 miles of the leg,” he said. “If it had not been for that, I would have finished a lot higher. But I was pleased. I finished and I didn’t finish last.”

Running has been a way of life for him for quite a while now. Although he has always enjoyed running, he didn’t began to run seriously until 2005.

“I started running for exercise and to stay in shape,” he said. “I also did a lot of swimming when I was a volunteer with the Boy Scouts, so I was running and swimming.”

Since running and swimming make up two of the three legs of a triathlon, Hightower began to entertain the thought of training with the goal of becoming a triathlete.

The first order of business was to purchase the necessary cycling equipment and that included the bike.

“I didn’t go out and spend a lot of money on a bike,” Hightower said. “I bought a cheap one.”

The price of the bike had nothing to do, however, with what happened with the tire on the second leg of the Alabama Coastal Triathlon.

Hightower said that he will continue to compete in intermediate triathlons as long as he can. He enjoys the competition and he also enjoys training for the events.

“You have to train for all three components,” he said. “Running is my strongest event because I’ve done a lot of running – for exercise and also competitively.”

He runs in 5Ks and 10Ks and has run a marathon.

To train for that leg, Hightower often heads to the Gulf.

“If I’m going to swim in gulf water at triathlons, I need to train in gulf water,” he said. “The waves are not a problem for me but the jelly fish are. I really enjoy the opportunity to swim in the gulf waters.”

Hightower has competed in triathlons in Panama City and Gulf Shores and the opportunity to swim in the gulf waters and run a flat course makes made those events especially enjoyable.

“Runners and cyclists always like a flat course,” he said. “But I train in Troy where we have hills so the hills at the Buster Britton Memorial Triathlon at Oak Mountain in Birmingham weren’t especially challenging.

The real challenge for Hightower every time he “suits up” is to do his best and to “finish and not finish last.”