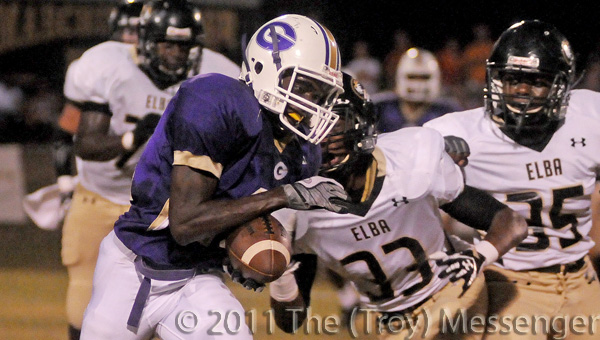 New Brockton will pay a visit to The Eagles Nest for a key region matchup.

The Gamecocks are 1-2 heading into tonight’s game having lost to Providence Christian and Highland Home by a combined six points.

“They look good on film,” Snyder said. “You can tell they are well coached and disciplined.”

Disciplined is also what the Eagles must be in order to come out on the winning side.

“They throw a lot of screens,” said Snyder “We are going to have to stay with our assignment defensively and keep them from making big plays.”

Goshen (1-2, 1-1) will get a boost offensively from kickers Steven and Daniel Macias, who joined the team last week. Steven, a junior, made an extra point for the Eagles in their 19-12 victory over Red Level. Daniel, a freshman, made, what Snyder claims, the first field goal in the history of Goshen’s junior varsity team.

Snyder said he has full confidence in using wither one of them in crunch time.

“I wouldn’t hesitate a bit,” he said of sending in one of the kickers with the game on the line.

Goshen is 7-12 all-time against New Brockton but has reeled off six consecutive victories against the Gamecocks.

The winner of this game will more than likely compete for the third or fourth playoff spot in Class 2A Region 2.

The Eagles defeated New Brockton 33-12 last season but Snyder knows both teams have a different look from a year ago.

“We’ve lost some key guys and so have they,” he said. “We’re just looking to execute and playing good defense.”

Game time in Goshen is set for 7 p.m.