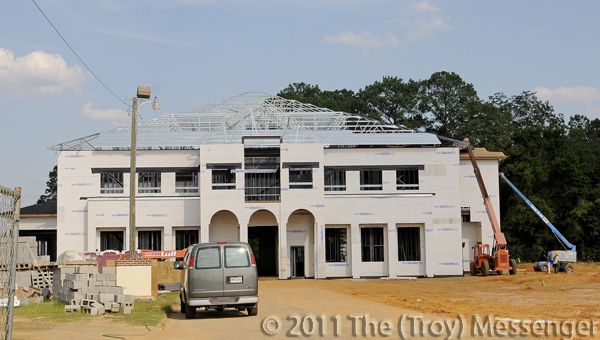 William White has his finger on the pulse of the construction of the new Troy Public Library.

As director of the library, if White were to check his own pulse, it would probably be rather rapid.

“It’s exciting and it’s also anxiety ridden,” White said of the library construction that is underway on Walnut Street. “You don’t want to make even the smallest mistake where expectations are so high. You have to have a plan of attack and see it through and hope for the best.”

Although White has never had to opportunity to oversee such a huge construction project before, he is confident in his knowledge of what the needs are for the new facility, the expertise of the architect and the support of the Troy City Council.

On Tuesday, the council agreed to White’s request for $174,350 in changes and upgrades to the library project, most of which had been removed from the original bid in an effort to control costs.

“The City of Troy has worked with us on all aspects of this project,” White said. “We were budgeted at $4 million and, when the bids came in nearly a half million under budget, we felt that we should bring some of the improvements back. And, the council was willing to do that.”

White said that without the requested improvements, the library still would have been an outstanding facility.

“But it would not have been ‘this’ library,” White said. “This opportunity to integrate these improvements into the plan will make the Troy Public Library a one of a kind. This library will be unlike any library anyone has ever seen. It will be entirely custom.”

When reworking the plans for the library in an effort to cut costs, White and architect Chuck Jones of Godwin Jones Architects of Montgomery modified the original plan to give the library entrance a more traditional look.

White said reading room will accommodate large groups and the furnishings will create a feeling of home.

“The entire library has been carefully designed and we have been able to get what we need and want for now and for the future,” White said. “We have an expanded children’s area that will allow us to offer the programs that we want to offer and when we want to offer them. It will also provide us with the opportunity to have children’s programs year round rather than just during the summer months.”

The new facility will make it possible to expand existing programs and initiate new ones for all ages, including adults.

The city has provided the funds for the construction of the new library and the library will purchase the furniture.

“That was the agreement from the beginning,” White said. “We are proud to be able to provide furniture and I am making sure of every individual piece that we purchase.”

The library will also feature a gated reading garden on the Elm Street side and a green area on the Academy Street side.

“ We had wanted a pedestrian area on the library grounds and the green area will include sidewalks, street lamps and ornate steps,” White said. “It will be pedestrian friendly.”

But, the landscaping will have to wait. The construction of the library is the order of the day.

“The construction is moving along at a steady clip but we don’t have a target date for completion,” White said. “I would like to see the project completed by April or May, before the summer reading program begins.”

But if not, the completion date won’t be much longer and White said the new Troy Public Library will be well worth the wait.

“This new library will be one of a kind and it will provide us with the facility that we need to house the materials on everything and anything relevant to a library and offer excellent programming,” he said. “There will be no limits to what we can do. If we can imagine it, we can at least try it.”