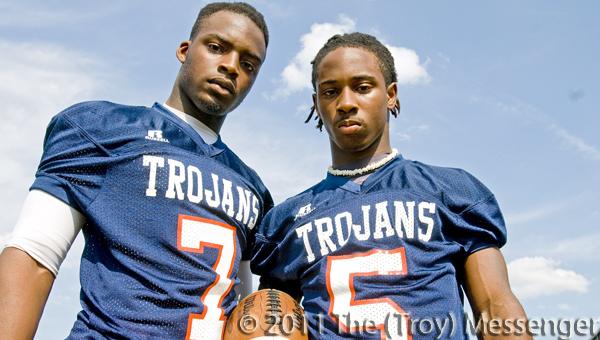 They don’t have a cute nickname like ‘Thunder and Lightning’ or ‘Batman and Robin’, they’re just known as Courtney Downing and Stanley Crawford.

The duo has helped lead the Charles Henderson High School Trojans to a 2-0 start in region play and look to keep things rolling against Valley Friday night.

Thus far in the 2011 season, the Trojan offense has not had a problem getting started on the ground. Charles Henderson has rushed for an average of 247 yards per contest and Downing and Crawford have led the charge.

In three games, Downing has racked up 505 yards with two touchdowns combined with Crawford’s 163 yards and four scores.

“The way Courtney runs makes me want to run harder.”

In last week’s victory over Booker T. Washington, Crawford scored three second half touchdowns to pull the Trojans through a shaky first two quarters en route to the 40-6 triumph.

“Courtney is going to get tired the way he runs,” Crawford said. “I just try to come in and keep things rolling.”

Despite having fewer touchdowns, Downing says as long as the Trojans score it doesn’t matter who gets the points.

“It doesn’t bother me at all,” he said. “He’s my right hand man. As long as we get it in the endzone, I’m not worried about it.”

Charles Henderson will take on a Valley team that defeated the Trojans 40-0 last season.

“We’ve got to run the ball in order to win,” Fountain said. “We’re not going to change our gameplan.”

Knowing their carries will come; both Downing and Crawford know a balanced attack is needed to make a deep playoff run.

“We’ve been working hard on pass blocking,” Downing said. “Joe (Bradley) can get the job done, we’ve got to do our job to help him.”

The Trojans are 5-8-1 all-time against Valley and have lost three straight to the Rams.

Kickoff from Veterans Memorial Stadium is set for 7 p.m.