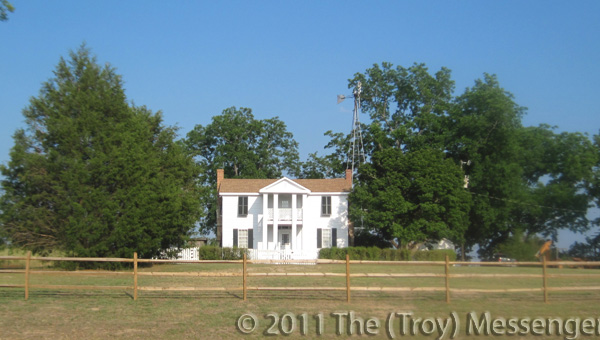 The Allred House (pictured), the former St. Martin Catholic Church, and the Conner-Chapman House have been named to the Historic Register. (Photo/Jaine Treadwell)

The Alabama Historical Commission has announced that the Allred House, Connor-Chapman House and the Old St. Martin Catholic Church in Pike County have been favorably reviewed and are now listed on the Alabama Register of Landmarks and Heritage.

The Alabama Register is a prestigious listing of historic, architectural and archaeological landmarks. These selected Alabama landmarks are worthy of both recognition and preservation.

John Phil McLaney, president of the Pike County Historical and Genealogical Society, said the listing of these three structures and the Johnson Mill in Brundidge are the first in Pike County to be listed since the early 1990s.

“It is an honor for these structures to be listed on the Alabama Register of Landmarks and Heritage,” McLaney said. “The Allred House, Connor-Chapman House and the Old St. Martin Catholic Church are owned by Corley Chapman, Jr. of Troy. We are very appreciative of his interest and support in compiling the information necessary to make application for listing by the Alabama Historical Commission.”

“The Allred House was built between 1840 and 1843,” he said. “The Greek Revival house was constructed of hand-hewn posts and beams. The two-storied ‘I’ house is one of the best surviving examples of this type of architecture in South Alabama.”

The house was built for Major William Burt Allred and his wife, Jane O. Park Allred. The house was restored by Corley Chapman, Jr., the great-great grandson of the original owner in 2011. The house is located on the Henderson highway.

McLaney said the Connor-Chapman House was built in 1878 for Martin Connor and his wife, Mary Catherine Connor.

“Mr. Connor was a native of Ireland and a veteran of the War Between the States. He came to Troy in 1869, and became one of the town’s leading merchants,” McLaney said. “In 1873, Mr. Connor constructed a large brick building at the corner of North Three Notch and Walnut streets where he carried an extensive stock of ladies’ dresses and millinery, dry goods and groceries.”

“The Connors were devout Catholics and the second floor of the Connor house was used for Catholic Mass,” McLaney said.

The Connors had no children and, at their deaths, they left a sizable contribution for the education of young men to the priesthood and provided funds for the construction of St. Martin’s Church in Troy and St. Andrews Church in Montgomery.

“The Connors enlarged the house prior to Mrs. Connor’s death in 1909,” McLaney said. “The house was later used as a funeral home. St. Martin’s Catholic Church used the house a residence for the priest and educational space for many years. In 1979, the property was purchased by Corley Chapman, Jr., renovated and returned to the original style of the 1880s.”

St. Martin’s Catholic Church was built around 1915 in honor of St. Martin and in memory of Martin Connor.

McLaney said the contractor for the Classic Revival style building was A.W. Woodroff. “The stained glass windows and barrel vaulted ceiling are exceptional,” he said.

“The building was purchased in 1980 by Corley Chapman, Jr. when a new Catholic church building was completed on Highway 87, south of Troy. The Old St. Martin’s Catholic Church, also known as the Emporium, is available for receptions, banquets and other formal parties.”

Other Pike County listings on the Alabama Register of Landmarks and Heritage are: