In search of optimism 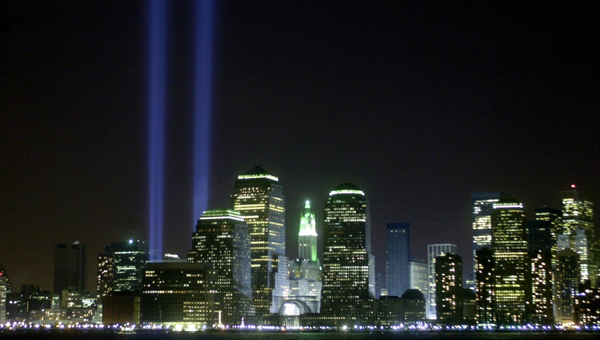 Above, the twin lights memorial rises above the New York City skyline on March 11, 2002, the six-month date of the 9/11 attacks. (AP Photo/Mike Derer)

NEW YORK (AP) — Before the towers crumbled, before the doomed people jumped and the smoke billowed and the planes hit, the collective American memory summoned one fleeting fragment of beauty: a clear blue sky.

So many of those who remember that day invoke that detail. Last week, New York magazine, which has been running a 9/11 “encyclopedia” ahead of the 10th anniversary, added an entry for “Blue: What everyone would remember first.” It chronicled nearly a dozen of the ways that Americans recalling 9/11 anchor their looks back with a reminiscence of blue sky.

No coincidence that the power of such an image endures. Blue sky is a canvas of possibility, and optimistic notions of better tomorrows — futures that deliver endless promise — are fundamental to the American tradition. In the United States, to “blue-sky” something can mean visionary, fanciful thinking unbound by the weedy entanglements of the moment. Off we go into the wild blue yonder.

But the years since 9/11 have dealt a gut punch to four centuries of American optimism. A volley of cataclysmic events — two far-off wars, Hurricane Katrina and its aftermath and, for the past four years, serious economic downturn — has worn down the national psyche. It’s easy to ask: Is optimism, one of the defining pillars of the American character, on the wane?

“Some of the really big challenges we are facing are really starting to sink in with people,” says Jason Seacat, who teaches about the psychology of optimism and hope at Western New England University. “You talk about that can-do spirit that used to exist, and it still can exist. But what I get a lot of is, ‘This is such a huge problem, and there’s really nothing I can do about it.'”

Welcome to the rest of the human race, some might say. Europeans, who can enjoy their fatalism, have been known to poke fun at American optimism. And why not? You could argue that the virus of optimism was spread to this continent by supplicants beguiled by the vision of a land that promised brighter futures — presuming you left the Old World to pursue them.

Since the 1600s, when one of America’s first Puritan leaders cast the society that would become the United States as a “shining city upon a hill,” the notion that one can will a better future into existence has been a central thread of the American story. The Declaration of Independence enshrined as national mythology not happiness itself, but the pursuit of it — the chasing of a dream alongside life and liberty as the ultimate expression of self-definition.

It took root. This became the nation where getting bigger and better was a right granted by God, where the Optimists Club was founded and “The Power of Positive Thinking” became a bestseller, where you could bet your bottom dollar that tomorrow there’ll be sun.

Last year, as we began a new decade, a Gallup poll found that 34 percent of Americans were pessimistic about the country’s future – the highest number at the start of a decade since the 1980s began. Numbers from Gallup’s Economic Confidence Index late last month were the lowest since March 2009. Most tellingly, perhaps, a majority of Americans — 55 percent — said this year they found it unlikely that today’s youth will have better lives than their parents.

More anecdotally, when was the last time that popular culture produced a strong vision of an optimistic American future? We got those all the time in the mid-20th century, era of the World’s Fair “Futurama” and promises of jet-packing your way to the office in the morning. But the Jetsonian view of tomorrow has become quaint, and today forlorn narratives like “Rise of the Planet of the Apes,” the zombie apocalypse drama “The Walking Dead” and Cormac McCarthy’s “The Road” dominate the American futurescape.

In the weeks directly after 9/11, optimism seemed on the rise for a time. The trumpet had summoned us again, and some people expressed a renewed sense of purpose. A high-stakes seriousness settled in. We spun tales of freshly minted heroes, gave blood, held benefits, told each other that hey, don’t worry, things will get better. A national coming together and the accompanying resoluteness were, it seemed, feeding hope.

“In an odd way, for all its tragedy, 9/11 reinvigorated the sources of American optimism at a very particular time,” says Peter J. Kastor, a historian at Washington University in St. Louis. “The problem now is recapturing that.”

This may be the central challenge for American optimism at the dawn of the second decade after 9/11: figuring out how much of the dream should be about the clear blue sky, and how much should be about wrestling with the problems that percolate beneath it. A balance, in effect, between the promise of our tomorrows and the reality of our todays.

It’s not like the future is going anywhere, though. It’s been our comforting companion for too long, and blue-sky dreams have a way of clawing to the top of any American story. Even after 9/11 and the uneasy decade that followed it tested the optimism of so many, that’s the thing about tomorrow: No matter what, it’s still always a day away.

Ted Anthony, assistant managing editor for The Associated Press, writes frequently about American culture. He covered the aftermath of the 9/11 attacks .

Southside Baptist Church in Troy will celebrate its 74th Homecoming on Sunday and all former members and friends of the... read more