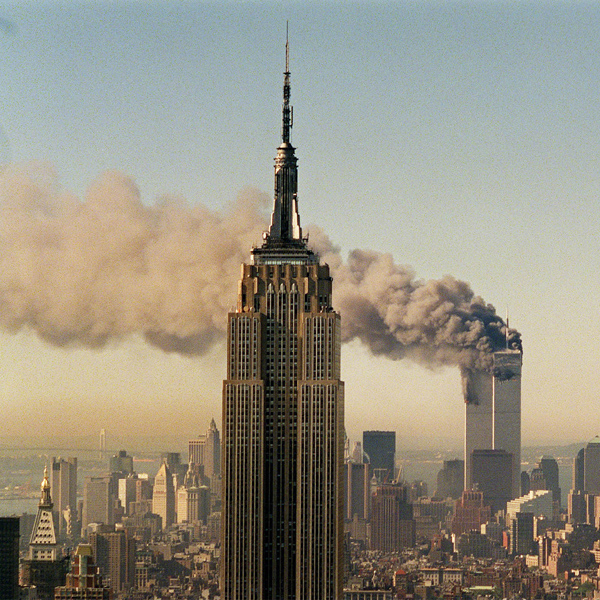 The twin towers of the World Trade Center burn behind the Empire State Building on Sept. 11, 2001. The 9/11 attacks are still echoing in lives 10 years later. (AP Photo/Marty Lederhandler)

September 11, 2001: The day that sent shockwaves through the American consciousness and forever changed our nation.

Known now simply as “9/11,” it started as any other day. Blue skies. Fall weather. Folks heading to work and going about their business.

In a matter of minutes everything change. First a commercial airliner hit the World Trade Center in New York. Some 40 minutes later, a second plane crashed into the second tower. What was at first a freak accident suddenly became an all-to-real attack on our nation and our way of life.

In the hours that followed another plane attacked the Pentagon in Washington, D.C. A fourth plane, likely headed to Washington for another attacked, crashed and burned in a field in Pennsylvania, a heroic act of bravery by passengers refusing to allow the hijackers success.

Then, the towers collapsed. In a matter of seconds, thousands of lives were lost and New York turned into an apocalyptic nightmare of ash and dust, it’s landscape forever changes.

Ten years later, we have distance but no separation from the events of 9/11. They have permeated our core as a nation, driving us to war and to patriotism and to cherish a freedom so many took for granted.

As the nation pauses to reflect and to remember on this anniversary, several Pike Countians shared emotions:

Every day that Debra Davis walks into her office, she is reminded of the “darkest day in American history.”

On her wall is a poster of 25 front pages from around the world on September 11, 2001 – the day terrorist attacks killed nearly 3,000 people on American soil.

Davis, Alabama Farmers Federation publications director, said she looks at the poster every day and every day she remembers.

“The poster, ‘The Darkest Page in American History,’ has the front pages from newspapers all around the world that show the World Trade Center towers under attack,” she said. “The newspapers graphically tell the story of the horror of Sept. 11, 2001. I look at the poster every day and remember, but I don’t live in fear.”

Davis said that she flew into Reagan National Airport in Arlington, Va., several months after the attacks on America.

“I saw soldiers armed with M-16s all round the airport and it actually made me mad that we had to resort to that because of terrorist acts,” she said. “The attacks on America on September 11, 2001 robbed us of much of our freedom but I am proud that I live in a country that tries to protect its citizens against those who would do harm to innocent people.”

Davis said that racial profiling is not a part of her nature.

“I actually feel sorry for Middle Eastern people who are being targeted because they look like people who were terrorists,” she said. “It’s not Christian to lump people together judge them just because of the way they look.”

Davis will be flying to New York on Sunday but she’s not concerned about her safety.

“I’ve not let what happened on 9/11 stop me from traveling and I’m not worried about flying on Sunday,” she said.

“It bothers me when others are bothered by the additional security measures,” she said. “So, what if it takes you another hour to get through security checks or you have to take your belt off. It’s for our protection and our safety, and it’s the way that we have to live now and will from now on.”

‘America can be had’

Billy Jackson of Banks is a World War II veteran. He remembers the radio broadcast that informed the nation that Pearl Harbor had been bombed. He remembers when WWII came to an end and the Greatest Generation came home to rebuild their lives.

He remembers, too, September 11, 2001, and the horror of that day and wonders if there will ever be an end to that reign of terror.

“That day showed us that America can be had,” Jackson said. “With all of the expertise and the information that is available to the masses, neither the CIA nor the FBI or anybody else can really protect us from those who really want to do us harm.”

Jackson said that when it’s possible to make bombs from the common fertilizers that farmers use or household products that women buy at the market, anybody anywhere at anytime could put together a bomb that could do extensive damage and destroy huge numbers of lives.

“What worries me is that our water supply could be contaminated,” he said. “There’s no way to protect it 100 percent.”

Jackson said chemical and biological warfare is a strong possibility.

“There are so many ways that those who want to do harm to America could do it,” he said. “Terrorists are so unpredictable.”

And, it’s for that reason that Jackson said he doesn’t expect any attempts at attacks on Sunday.

“That’s too predictable,” he said. “Security will be heightened in anticipation. If you were going to rob a bank and it was surrounded by police officers, you wouldn’t try it. I don’t think anything will happen on Sunday.

Jackson said whoever put together the attacks on America on September 11, 2001, was a genius.

“They had to be a genius to accomplish something as complex as that,” he said. “To be able to come up with a plan to board commercial aircrafts, make their way into the cockpits and then fly those aircraft the way they did — somebody had to be a genius.”

Jackson said in dealing with terrorist groups, their mindset is completely different.

“They have a fighting spirit and they hate America and are committed to destroying as many lives as they can,” he said. “They are unpredictable and that’s scary. But, the terrorists have proved their point – that they can attack us on our own soil. They will do it again but when it is least expected.”

‘Our country was under attack’

Troy Mayor Jimmy Lunsford was working in his office on the morning of September 11, 2001. There was nothing out of ordinary about the day until he walked down the hall.

“Someone said that a plane had flown into a big building in New York,” Lunsford said. “I went to the television and started watching. I got sick to my stomach when I realized that it wasn’t an accident – that our country was under attack.”

Lunsford said that watching the day’s events unfold, he had the same feeling that he had when he heard that President John Kennedy had been shot.

“It was just a feeling that I can’t describe,” he said. “But 9/11 is a day that has impacted the lives of all Americans and will from now on.”

As mayor of a small city in the rural South, Lunsford said that he is reminded daily of the obligation before him to remain alert and informed in an effort to keep Troy safe.

“On the first anniversary of 9/11, I was watching a national newscast and the news anchor was cautioning his audience that another attack could happen anywhere from New York City to Troy, Alabama,” Lunsford said. “My telephone started ringing with people wanting to know why he said ‘Troy, Alabama’ and what the threat here was.”

The newscaster had undoubtedly picked two distant points but why Troy, no one knew.

The impact of 9/11 continues to be felt in cities and towns all across the country every day.

“Weekly security reports and alerts are sent out to police departments all over the country,” Lunsford said. “The alerts range from yellow to green and red. Right now, we are on elevated alert because of the 10th anniversary of 9/11.”

Even in small towns, there is potential danger from terrorists.

“Our water supplies are possible targets,” Lunsford said. “Putting contaminants into the water supply would be an easy way to cause harm to many people. We do regular checks on our water wells to make sure that they haven’t been tampered with.

“We are doing a lot of things that we never thought about doing before.”