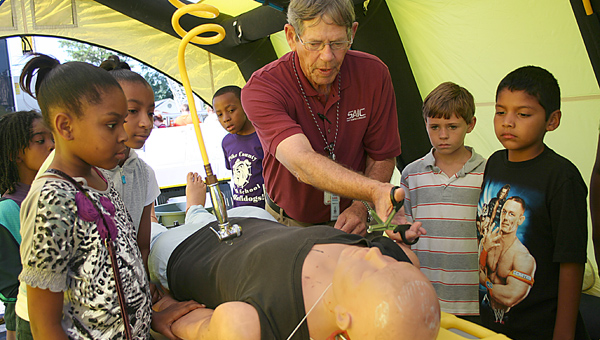 Fran Byrd, of Science Applications International Corporation, demonstrates life-saving techniques to school children attending the Be Ready Day events at Troy University on Thursday. Byrd was one of several dozen participants who shared information to the public about preparing for disaster before it strikes. (Photo/Jaine Treadwell)

“Be Ready Day” was set aside by Gov. Robert Bentley to focus the attention of Alabamians on what state and local agencies, volunteer organizations and, most importantly, individual citizens can do to prepare for disaster before it strikes and the steps individuals can take during and after a disaster.

“Be Ready Day” featured displays of equipment from first responders, state agencies and volunteer organizations active in disasters and focused on the state’s attention on being prepared for disasters well before they hit, said Dean of Students Herb Reeves, who coordinated the on-campus event.

“Troy University was honored to be asked to host ‘Be Ready Day’ and be a part of a program that recognizes first responders and the commemoration of the 10th anniversary of 9/11,” Reeves said.

About 36 vendors participated in the “Be Ready Day” event that Reeves said was a great success.

“In addition to the state agencies that participated we had a large number of local participants including the Troy and Brundidge police departments, the Troy Fire Department and the Meeksville and Banks volunteer fire departments. Our local EMA and Red Cross also had exhibits.”

Reeves said all schools in the county, as well as area schools, were invited to participate.

“We has students from as far away as Lanier in Montgomery to participate,” he said. “From the local area, the Pike County schools, Charles Henderson and Pike Liberal Arts participated.”

Thirty-eight students in Charles Henderson Middle School’s enrichment program attended the “Be Ready Day” activities and said the vendor booths and equipment displays were educational as well as fun.

Yvon Brantley, program teacher, said the “Be Ready Day” brought to the students’ attention the need to be prepared for disasters as well as other emergency situations.

“We learned that that it’s very important to be ready for any kind of emergency,” said Lindsay Lee. “You never know when something tragic is going to happen and, if you don’t have some idea of how to respond, then the situation probably will be worse because you didn’t know what to do.”

Kush Patel said he was impressed by the amount of equipment that is available to those who respond to disasters.

“There are first responders for every situation,” he said. “If it’s chemical emergency, there are people especially trained for that but, if it’s a disaster where a lot of people are hurt, there’s a plan for that.”

Corey Bandy said that he was impressed by the many agencies that are trained to handle emergency situations.

“It’s good to know that we have so many people to help us where emergencies happen,” he said.

A part of National Preparedness Month, Alabama’s “Be Ready Day” is sponsored by the Governor’s Office of Faith-Based and Community Initiatives, the Alabama Department of Homeland Security, the Alabama Emergency Management Agency and Troy University.