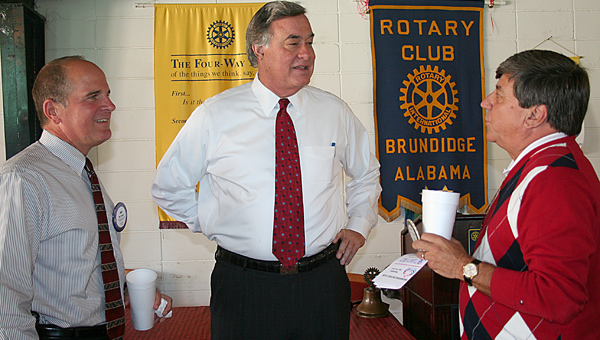 When the Brundidge Rotarians want to talk politics, they don’t mess around.

Flowers was the guest speaker at the Brundidge Rotary Club on Wednesday and talked everything from high school football when prominent attorney Jere Beasley quarterbacked the Clayton Tigers to a 55-0 romp over the PCHS Bulldogs to the Alabama Bingo Trial to the 2012 Presidential campaign.

“Beasley sought the nomination for governor in 1978 but finished fifth and that was probably the best thing that could have happened to him,” Flowers said. “I don’t know what he’s worth now but it’s a lot.”

As for the Bingo Trial, Flowers said the trial was a Montgomery media event that didn’t get much attention outside the River and Wiregrass areas.

“The key to the trial was the jury selection,” Flowers said. “The defendants paid big money to pick the jury.”

Flowers said the defense brought in a serious looking man in a “ten thousand dollar” suit who is an expert in witness politics.

“When the jury was picked, this case was over,” Flowers said.

Flowers called the defense lawyers, “the best in Alabama” and the prosecution, “the worst.”

“They didn’t even know where the courtroom was,” Flowers said of the prosecuting attorneys. “It was like the New York Yankees against the Montgomery Biscuits.”

Flowers said the jurors were looking for hard evidence of bribery and there never was any.

“I don’t know that a campaign contribution is bribery,” he said.

Flowers said all of the defendants in the Bingo Trial were actually losers.

“Many of them lost their life savings, probably including Milton McGregor (Victoryland casino owner),” Flowers said. “He’s either got deep pockets or he’s broke.

“A lot of money is spent on gambling in Alabama. The Indian facilities are the winners in all of this because the Victoryland business has gone to the them and I hear their business is booming.”

Flowers said that Ronnie Gilley, developer of the shattered Country Crossing complex near Dothan, is not the “greatest guy in the world” and that he and lobbyist Jarrod Massey didn’t outdo themselves by pleading guilty “because they are.”

On national politics, Flowers said that the Electoral College is outdated and needs to be abolished in order to give all states a “vote” in the presidential elections.

“In Alabama, our votes don’t count,” he said. “Florida, Arizona, Colorado, Ohio, Pennsylvania and 10 other states are where the election is held.”

“I’ve never seen the economy as bad,” he said.

Flowers said Texas Governor Rick Perry and former Massachusetts Governor Mitt Romney as the “horses in the gate” for the 2012 Republican presidential nomination.

“Rick Perry is the perfect candidate for the South and he’ll run through the South,” Flowers said. “He’s a pistol toting evangelical but I’m not sure that he’s who the rest of the country will want to take to the dance.”

Flowers told the Rotarians that the country today “is not like the country we grew up in” so what happens with the economy and in politics is anybody’s educated guess.

Clash of the Titans