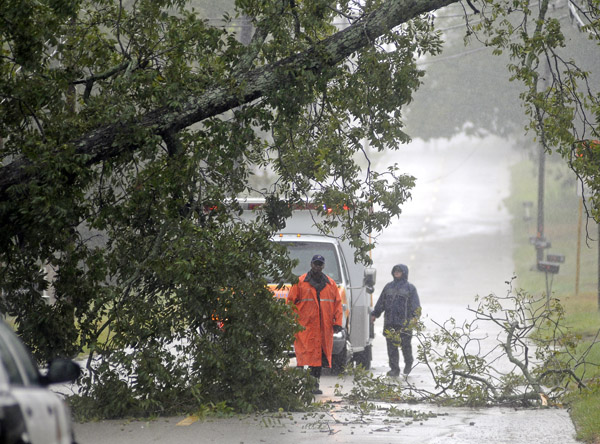 Officials look at a tree down on Montgomery Street in Troy, Ala., Monday, Sept. 5, 2011. (Messenger Staff Photo/Thomas Graning)

Pike County farmers prayed for rain, and they got it on Monday, as the remnants of Tropical Storm Lee dumped more than two inches of rain on the area.

“At noon, they were reporting two inches but my parents, who live just north of the aiport, had more than four inches of rain (by 2:30 p.m.),” said Jeanna Barnes, Pike County EMA director.

“I haven’t heard of any serious problems … just people glad they’re getting rain and some lower temperatures behind it.”

Lee moved slowly across Louisiana, Mississippi and Alabama throughout the weekend and Monday, with forecasters warning that the slow-moving disturbance could dump more than 10 inches of rain inland.

Here in Pike County, several vehicle accidents were reported due to the weather. A tree on Montgomery Street in Troy fell across a power line around 2 p.m. Thursday, blocking the street for several hours.

“It’s mostly been a rain event for us,” Barnes said. “And we needed a lot of rain.”

The county was under two tornado warnings during the day, both occurring in the extreme northern areas of Pike County. However, no tornado sightings were reported.

“We’re under a tornado watch until 4 p.m. (Monday) but I think they’ll let that expire,” Barnes said. “Birmingham weather has been issuing severe thunderstorm warnings instead of tornado warnings, so that’s good news.”

Meanwhile Monday, Lee was dumping steady rain across the South, causing scattered flooding and power outages. Forecasters warned the slow-moving system could cause inland flooding in areas with hills or mountains in the coming days. Isolated tornadoes also had been reported in Mississippi and Alabama, though no widespread damage or deaths were reported. Flash flood and tornado watches were in effect across several states.

By Monday, the heaviest rain was in east Mississippi and pushing into Alabama. 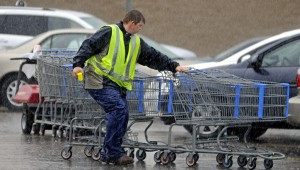 Chris Mims, a spokesman for the city of Jackson, said 45 families in an apartment complex were taken to a storm shelter because of water from a flooded creek that came near the building.

The storm dumped 8 to 10 inches of rain in central Mississippi before slacking off as it weakened and pushed to the east. As much as a foot fell in parts of New Orleans, and even more in other areas.

Just west of the Florida Panhandle, Alabama’s main beaches in Gulf Shores and Orange Beach alternately filled and emptied of tourists as squalls from Lee moved across the coast on Labor Day. Many vacationers spent the morning packing for the drive north toward heavy storms moving across the region.

Beaches were empty about 35 miles west on Dauphin Island as waves broke beneath houses standing on stilts and splintered lumber floated in the surf. Much of the island’s main road was flooded and covered with sand, jellyfish and foam washed in by Lee. Customers trickled in to the town’s largest store on what should have been a busy day.

“It’s been kind of boring,” said Tabitha Miller, a clerk at Ship and Shore. “It’s not killing us though since we’re the only gig in town.”

Closer to the Gulf, the water is “just going to sit there a couple of days,” he said. “Up in the Appalachians you get more threat of flash floods.”

The system was sluggishly moving on a track that would run it up the Tennessee River Valley on Tuesday. It had already dropped nearly 4 inches of rain in Pike County, Ky., by Monday morning. Flash flood watches were issued for parts of both Tennessee and Kentucky, and forecasters warned that stream flooding and mud slides were possible.

So far, the weather had not prompted any evacuations of Labor Day campers at Great Smoky Mountains National Park.

Some of the damage on the Gulf Coast, where tropical storms are an almost yearly event, appeared to come from spinoff tornadoes that touched down in southern Mississippi and Alabama.

Dena Hickman said her home in Saucier, Miss., was damaged by what she believes was a tornado. It happened too fast for her to get her 12-year-old daughter, who uses a wheelchair, out of her bed and into a safer place. 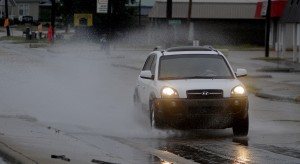 A car drives through a puddle on South Brundidge Street in Troy, Ala., Monday, Sept. 5, 2011. (Messenger Staff Photo/Thomas Graning)

“I laid on top of her to try to protect her. It all happened so quickly I couldn’t do anything else,” she said Sunday.

Her family weathered the storm, but it damaged shingles on their roof, flipped a 34-foot camper on its side, ripped off the roof of a cinderblock building that houses a water pump and pulled the doors off of a metal shop building. Harrison County officials said five homes were damaged by the suspected twister, but no injuries were reported.

As much as a foot of rain fell in parts of New Orleans and caused some street flooding, but the city’s 24 pumps were sucking up the water and sending it into Lake Pontchartrain. About 200 families had to be evacuated because of flooding in Livingston Parish.

In Plaquemines Parish, authorities were planning to cut a hole in a levee to drain water from a main highway. The parish south of New Orleans sits on a sliver of land dotted with oil and gas companies and is protected by two levees — a Mississippi River levee and a so-called back levee.

Parish spokesman Kurt Fromherz said wind from Tropical Storm Lee pushed water into Barataria Bay, which caused water to overtop the back levee in low places. Once the wind shifts, crews will cut a hole in the levee to drain water from Louisiana 23, the main artery through the parish, Fromherz said.

TCS to dip into reserves to offset expenses

The proposed 2012 budget for the Troy City Schools pulls some $2.6 million from reserves to offset expenses and efforts... read more