Goshen falls late to No.1 Elba 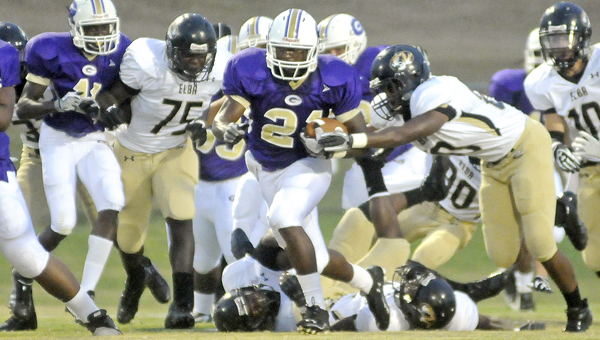 GOSHEN – The Goshen Eagles may not have won the game but the showed they have some fight in their bellies.

Coming off a disappointing 48-20 loss to G.W. Long in Week 1, the Eagles were faced with a stout obstacle in the top ranked Elba Tigers and for three and a half quarters Goshen answered the call.

Stepped up they did.

The Eagles trailed Elba 13-6 midway through the fourth quarter when the Tigers would score two touchdowns to pull away and take home a 26-12 victory.

Elba got on the board first on the first play of the second quarter when quarterback Austin Johnson scored on a 18-yard run.

Goshen responded in the third quarter when Jerome Lawrence fired a pass from the 7-yar line intended for Brandon Alford on a, who was lined up wide on the right side, on a slant route. The ball was tipped into the air at the line of scrimmage. Fullback Rashad Rodgers reacted quickly, snagged the ball and rumbled untouched into the endzone. The extra point was missed leaving the Eagles behind 7-6.

That was as close as Goshen would get, however, as Elba scored on a seven play drive. The Tigers could not convert a 2-point conversion but held a 13-6 advantage.

The score would remain such until the fourth frame when Michael Lindsey scored on a 4-yard run, Elba lead 19-6.

The Goshen offense would stall and punt with 7:26 remaining. The Tigers then showed why they are ranked No. 1. Lindsey took the hand off on the first play and scampered 57-yards for the score.

Goshen would add a touchdown on a 13-yard Lawrence run with seconds remaining.

Snyder said after the game the defensive adjustments made this week showed.

“We made some personnel changes especially to our linebacking corps.

“With the offence we saw tonight we only had two backers in most of the game but we moved Devandrick (Merritt) back down to defensive tackle where he can make plays.”

Goshen running back Reginald Foster finished with 100 yards on 19 carries.

Lawrence was 5-for-14 passing for the day for 51 yards including the touchdown to Rodgers.

Goshen falls to 0-2 for the first time since 2005. Synder feels his team is taking steps in the right direction.

“We climbed a mountain since last week,” Snyder told some of his players. “Look hoe far we have come and think about how far we can go.”

The Eagles will travel to take on Red Level next week.