A pony of his own 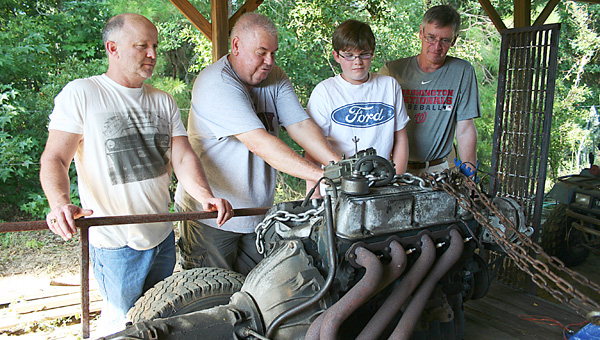 Ben Smith, Steve Stokes, Benjamin Smith and Dan Smith look over the engine they removed from a 1965 Mustang that Benjamin, his father and his uncle are restoring for Benjamin's 16th birthday. (Photo/Jaine Treadwell)

A pony of his own

Anything worth having is worth working for … and waiting for.

Some famous person said that once. Or, it could have been 13-year-old Benjamin Smith because he certainly believes it – right down to nuts and bolts of it.

Benjamin’s dad, Dr. Ben Smith, and his uncle, Dan Smith were all poured from the same mold and they, too, believe that things that come too easily don’t hold a great deal of significance. But those things that you dream of and hope for and work for and wait for are the things that mean the most.

That’s why Dr. Ben decided that, when his son turns 16 years old and gets behind the wheel of a car, that vehicle is going to have to mean something to him.

At first, Benjamin wasn’t exactly sure how that was to be.

But his dad had an idea and it was an idea that Benjamin bought into immediately.

Benjamin has always liked classic cars and the idea of getting an old fixer-upper and fixing her up just like new appealed to him. After all, it would be three years before he could drive on his own and, too, it was the best way to own a classic car without having to rob Fort Knox to get the money to buy one.

Benjamin wanted to make sure that he chose just the right “classic’ for him. So he did the research and, in one classic car magazine, he found just what he wanted – a 1965 Mustang.

But the Mustang Pony that came to pasture at the Smith home didn’t like much like the one in the classic car magazine. It looked more like a vehicle that was rusting out in a roadside junkyard.

“But it ran … until we got it home,” Benjamin said with a smile. “Then we started taking it part, one part at a time.”

Dr. Ben said he wanted Benjamin to know everything about the car – every nut, bolt and wire – and how it was put together and what made that Pony run.

Benjamin’s dad and uncle know a little more about mechanics than a lot of men because their dad, the late James A. “Moon” Smith knew a great deal about cars and how they ran. He owned and operated Smith Brothers Body Work on Trojan Terrace for nearly three decades, 1950s through 1970s.

Although Dr. Ben and Dan had inherited some of their dad’s mechanical genes, they knew there is no room for error when putting a car back together piece by piece, so they did the wise thing. They enlisted the help of Dr. Ben’s brother-on-law, Steve Stokes, who has experience working with mechanical things.

Steve pulled the engine and the other “mechanics” got down to the nitty-gritty of the job.

“We all know how important it is for a young man to know how to handle wrenches, sockets, screwdrivers and all the basic tools,” Dan Smith said. “Taking the Mustang apart and putting it back together would be a good learning experience for Benjamin and something that we could do together. We were all excited about the project.”

Benjamin enrolled in Wrenches and Sockets 101 and rolled up his sleeves and started taking apart his dream car.

“We took off everything that we could,” Dr. Ben said. “We stripped the car down to the bare bones.”

Bare bones would have held more promise than the rusty, worn out body with more holes that a sieve.

Sitting there in the barn with its bare bones exposed, the First Generation Mustang didn’t look like it had much giddy-up and go.

“But I knew that if Benjamin helped restore the car it would mean a lot more to him than a car that I just handed him the keys to,” Dr. Ben said. “I wanted Benjamin to have a car that he would take pride in and, if you take a car apart and put it back together, you’re going to have a lot of pride in it.”

Benjamin’s uncle Dan, said he and his brother have an understanding with Benjamin that he must be present when all of the work on the car is done.

“We’ll give him instructions on what piece to take off and put on,” Smith said. “We’ll let him handle the wrenches and tools and explain to him the purpose of what’s being done as we put the car together … for him.”

The Mustang Pony that Benjamin is helping build back is not going to be a show car. It’s going to be an every day car. One that he will drive to school, around town and maybe down to the beach for a weekend.

The Mustang will be restored with that it mind, so it will have power steering, disc brakes, a CD player, a stereo and shiny hubs. And, although it might not be a show car as such it will be a car that will turn heads and stand out in the school parking lot.

“But I might drive the truck, though,” Benjamin said, with his brow forming a question mark. “I don’t want it to get a dent or anything in it.”

Pride comes quickly when you’re hot, sweat and greasy and on the first day of a three-year “job.”

And, the Pony will be nearly 50 years old but it won’t look a day of it because it will have been petted and pampered and loved and cared for like the treasure that it is.

Dr. Ben and Dan said they know how proud their dad would be to know that the four “boys” were working together as a family to do something really special and meaningful. And more than “building” a car, they are building memories that will last a lifetime for all of them.