A ‘chili’ kickoff for United Way 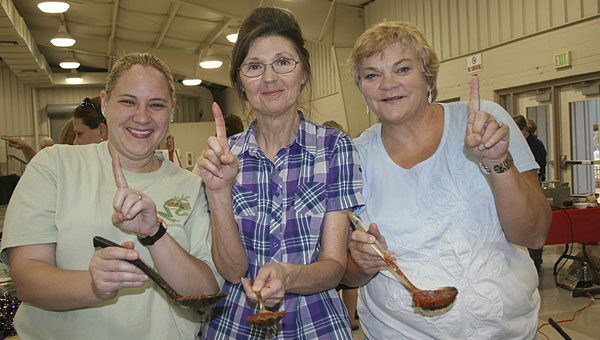 “Vote for my chili!” The cooks were campaigning for votes for their chili at the Pike County United Way Chili Cook-Off Tuesday night. Jamie Burchill, Susan Jinright and Donna McLaney each believed that their chili was number one. And there could be little argument with any of the cooks.

The 2012 Pike County United Way fundraising campaign got off to a “chili” start Tuesday night at Cattleman Park.

The 17 local agencies that receive funding from the Pike County United Way competed in a chili cook-off along with individuals from the community and the judges were the tasters.

For a dollar donation, those who were on the other side of the table were allowed to taste as many of the entries and they wished and were invited to taste-test twice, thrice and four or more if needed to come to a decision.

Bob Lambert of Troy stationed himself near the entry he was considering the best and “considered” several samples of the same.

“This is the best chili that I’ve ever had and, not just this one,” he said. “It’s all exceptionally good. It would be hard to choose one over the others.”

The tasting was going down to wire and the winners would be announced at the end of the night’s events, which included entertainment by the popular bluegrass gospel group, the Benton Brothers and Company and a silent auction.

“The Chili Cook-Off is a good event and the funds raised go to good cause,” said Kim May, director of the Pike County Salvation Army, one of the agencies that receives funding from the United Way. “It was a new way and a great way to kickoff the Pike County United Way campaign for 2012.”

Cathy Sheffield, president of the United Way board, said for a first-time event, the Chili Cook-Off was a great success.

“This was all new to us but I’m pleased with the participation and the turnout,” she said. “Of course, we would have liked to have had more people come out to enjoy the event. But the agencies that we serve were very supportive.

“Everyone seemed to have a good time so we will build on this year and have an even bigger event next year.

“But I don’t think that the chili competition could be any better. Everyone did a great job and we really appreciate their efforts.”

Sheffield said that the Pike County United Way board has not set a fundraising goal.

“We just want to raise as much as we can to support these agencies that help our people right here at home,” she said.