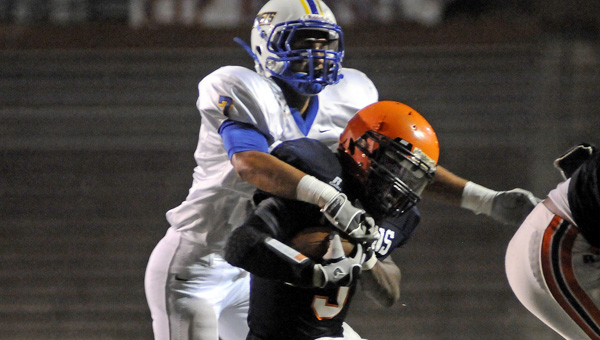 When the chips were down, head coach Hugh Fountain and his Charles Henderson Trojans showed they could stand their ground and fight, but it wasn’t enough to stop a punishing Beauregard Hornet attack from handing the Trojans a season opening 21-14 loss.

Charles Henderson failed in four plays to score from the 1-yard line with under five minutes remaing.

When the Hornets broke through in the first quarter on a short rush to go up 7-0, it was the beginning of a long night for the Trojans.

The Hornets quickly followed the opening touchdown with another only minutes later, putting 14 points on the board before the Trojans could react.

The Trojans weren’t about to give up, however. Just as time expired in the opening quarter, senior quarterback Joe Bradley went to the air to junior Ernest Downing for a 27-yard touchdown.

The Trojans couldn’t keep the deficit close for long though, as early in the second period the Hornets put another touchdown on the board on a long 44-yard pass.

Coming out of halftime, the Trojan defense kept the Hornets out of the end zone for the entire third quarter, but was unable to gain any ground on the Hornets.

Things started to pick up in the fourth when the Trojans mounted a comeback by scoring their second touchdown on a short fourth down pass to from Bradley to Downing.

Down by seven, the Trojans were handed their biggest stroke of luck of the night, when on the kickoff the Hornets fumbled the ball and gave the Trojans possession back in enemy territory.

The tables quickly turned though, and on a third down pass the Hornets intercepted a tipped ball to regain control.

Luck was still on the Trojans side however, and immediately the Trojans took back the ball after a bad snap allowed Davenport to scoop up the fumble and return it to the 1-yard line.

The Hornet defense stiffened and was able to keep junior Trojan running back Courtney Downing out of the end zone on three consecutive carries. Bradley’s fourth down pass was batted down to hand the ball back to the Hornets on downs.

Charles Henderson would have one more possession with only minutes remaining but the Hornets were able to push the Trojans back into their own territory and eventually end the game at 21-14.

“Football is a game of opportunity,” Trojans coach Hugh Fountain said. “We had opportunities but we didn’t take advantage of it, especially late in the game.”

Offensive players on both sides of the ball put on good showings, racking up over 100 rushing yards.

Downing managed a solid 160 yards on 24 carries averaging 6.7 yards per carry, while Hornet sophomore running back Eddie Washington wreaked havoc on the Trojan defense with 103 yards on 21 carries.

“Courtney put it on the line for us and played hard,” Fountain said. “He did a great job this week but when you’re an inch away from the end zone you’ve got to punch it in.”

Quarterback Joe Bradley threw one interception on the night and his offense fumbled twice.

The Hornets had two as well, with the one lost fumble giving the Trojans position on the 1-yard line and nearly taking the game to overtime.

“We’ve got a lot of holes to fix and we’re going to take a look at what worked tonight,” Fountain said. “We need to know what it takes to win against a team like Tallassee next week. We showed some weaknesses tonight and we’ve got work to do all across the board.”

The Trojans will prepare to go on the road to Tallassee for their first region game of the season on Sept. 2. Kickoff is set for 7 p.m.