City gets grant for sewer upgrades 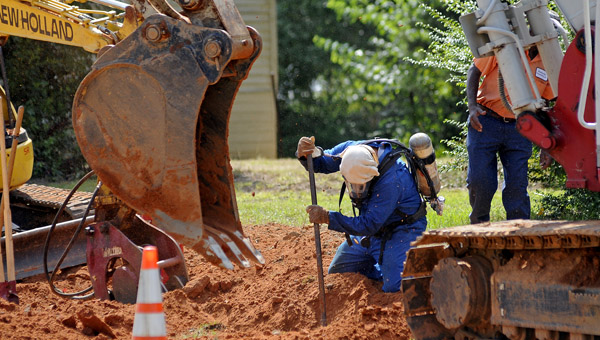 From file, a worker seeks to repair a gas leak which occurred during the infastructure repairs on Madison Street. The next phase of the project includes street widening and repaving.

The mayor said that ADECA grant funding will be available to the city in the amount of $950,000 for sewer improvements necessitated by the recent location of Golden Boy Foods in the former Hudson Industries facility on the Henderson Highway and the expansion of KW Plastics in the same area.

“The city will be benefit from state and federal funding due to job creations by these two industries,” Lunsford said.

The original grant funding was for $650,000 based on Golden Boy Foods, however, KW Plastics will be able to utilize the same sewer system so the two sewer projects will be treated as one.

The city council awarded the bid for police interceptors to the low bidder, Ken Cox Ford of Troy in the amount of $25,400.

Troy Police Chief Anthony Everage said that the city had the opportunity to purchase five Crown Victorias that were in reserve stock to replace police vehicles that were taken out of service.

“The cars that were taken out of service each had over 100,000 miles and were worn out,” Everage said. “We were fortunate to be able to get the Crown Vic because they will no longer be produced.”

The grant funds will be used to upgrade the cars for use as police vehicles.

The council passed a resolution allowing KW Plastics Recycling to participate in the Enterprise Zone Program administered by ACEDA but carried forward the awarding of the bid for airport improvements.

Lunsford told the council that the water line installation on South Brundidge Street has been completed and, as soon as phone and cable work is completed, construction to widen the street will begin.

“We ask the public to bear with us,” Lunsford said. “One day, we’ll have a wider street and one that will be much nicer to drive on.”

Lunsford also said that work to add a turn lane on Franklin Avenue will begin soon. The intersection work will be done with state funds.

The council heard from J’ean “Mama J” Collins a member of the Workers of the World outreach program.

Collins was seeking support for the outreach program that is based at 209 Elba Highway.

Collins said that the program has fed more than 600 people since it began seven weeks ago. The program also provides clothing and other personal needs and counseling services for those with spiritual needs.

“We get about 200 calls a week for assistance and many of those are referrals from DHR,” Collins said. “We need help in supporting our outreach program. We need those who would partner with us by making monthly donations or by providing facilities.”

Collins said that she understood that the city cannot support private endeavors but asked the council members to use their influence to encourage others to support the outreach program.