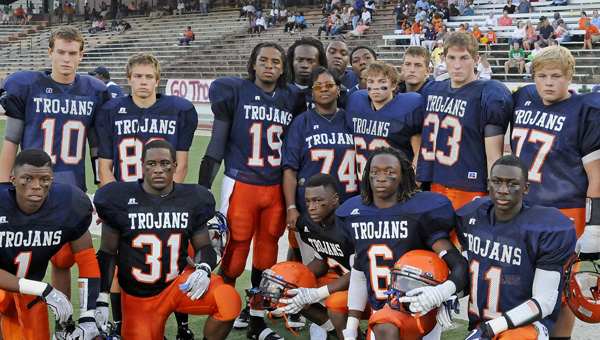 Members of the Charles Henderson High School football team pose for a photo with Veronica Moore, mother of Ronnell Moore, before the first quarter of the 2011 Pike County Classic football game (Photo/Thomas Graning)

Charles Henderson honored a member of their team Friday night as the Trojans took the field for the first time without former offensive lineman Ronnell Moore.

Moore, who was killed June 14 in a car accident near the community of Ramer, was honored at Friday’s Pike County Classic between Charles Henderson and Pike County with his mother, Veronica Moore, serving as an honorary team captain for the Trojans.

“It was a huge loss for us,” head coach Hugh Fountain said. “He meant so much to this team and to these boys.”

Mrs. Moore was asked  by the team to attend the game and walk to midfield with the captains for the coin toss.

“She walked Trojan Walk with us and sat on the bench with Ronnell’s jersey on,” Fountain said. “It meant a lot to the team to see his number sitting in his spot.”

While Fountain feels the void left by Moore’s death can never be filled, the response he has seen from his players has been uplifting.

“I didn’t know it until recently but the guys won’t touch his locker. They want it to stay as it was for this season. He is still a part of this team even if he isn’t with us.”

Fountain said the players also individually wrote letters to Moore’s mother expressing their sympathies and memories of their teammate.

“These guys really like Ronnell,” said Fountain. “When she (Mrs. Moore) showed up I could tell the players weren’t going to let her down. And they didn’t.”

Fountain also mentioned that having Ronnell’s mother on the field and talking to players before kick off gave the Trojans a sense of comfort.

“It has to be a very tough thing to go through,” said Fountain.