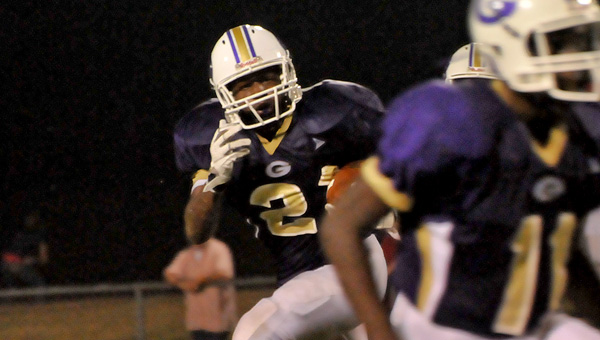 GOSHEN – Goshen High School fans may have been a little surprised at the 14-14 score in Friday’s jamboree game against Ariton especially with the high expectations reverberating from last season’s 9-2 team.

The Eagles struggled to get the ball rolling against the Purple Cats with their two biggest offensive threats, Jerome Lawrence and Reginald Foster, being held to just 160 yards combined rushing, 68 of which came on a single Lawrence run in the second quarter.

“We are going to work extremely hard with our offensive line this week,” head coach Bart Snyder said. “We have several adjustments to make.”

One of those adjustments Snyder said will be working with the inexperienced linemen on is quickness off the snap and holding their blocks.

“We didn’t get off the ball as well as I’d like,” Snyder said. “Our linemen did an OK job of getting to their assignments they just didn’t stay with them the entire play.”

Goshen has been mixing and matching faces on the offensive front all summer looking to find the right combination.

Another area Snyder will concentrate on is the blocking of his running backs.

“Our guys have got to get better at picking up their blocks and like our linemen staying with them.”

“They are an important part of our passing game not only catching the ball but helping protect as well.”

A youthful corps of linebackers will also get extra attention this week. Snyder said he was not pleased with the way his backers failed to step up and plug gaps.

The Eagles will have three days this week to prepare for G.W. Long on Thursday.

Goshen will travel to Skipperville for the 7 p.m. kick off.