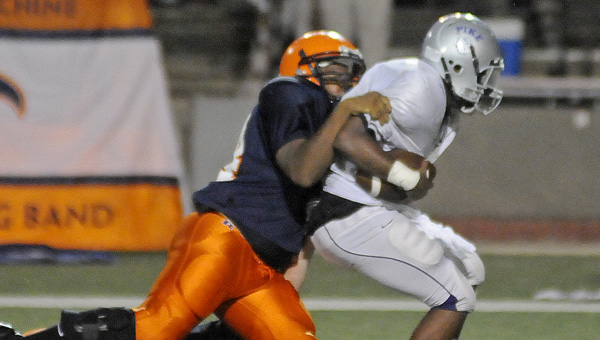 harles Henderson showed signs of defensive strength in Friday night’s 27-0 shutout of Pike County. While the Trojans have a long tough schedule ahead of them, head coach Hugh Fountain was pleased by his squad’s over all performance.

“I saw a lot of hustle out there,” the coach said. “ We were flying to the ball as a unit and didn’t give up too many big plays.”

Big plays were definitely few and far between for Pike County’s offense. The longest Bulldog play was a 25-yard pass from quarterback Marlon Meadows to Quadry Greasham in the game’s opening quarter.

The Trojans surrendered only 169 total yards to Pike County.

“I was proud of the way our younger guys played in the secondary,” defensive coordinator Tyrone Black said.

Charles Henderson started freshman Richard McBride at cornerback and he did not disappoint. The frosh intercepted a Pike County pass at the Trojan 18-yard line in the second quarter to thwart a Bulldog drive.

Black also praised his front seven and the pressure they applied to Meadows all night.

“Obviously he’s an athletic quarterback, I thought we should have had a couple more sacks than we did but to put the pressure on him like we did really disrupted their passing game.”

Fountain said he was looking for improvement from his players rather than any eye-popping statistic.

“We didn’t have one guy stand out on paper,” Fountain said. “We had guys like Anthony (Siler) and Joey (Denison) who got better from last year and that’s what I was looking for.”

One of the few areas defensively Fountain saw there was room for improvement was the filling of running lanes against a scrambling type quarterback like Meadows.

“We’re going to see athletes like that this season. He hurt us a little running the ball,” said Fountain. “We’ll work on closing those holes this week and continue to get better at it.”

Overall, the Trojans allowed only 63 yards rushing with that statistic looking a little skewed as the result of a 21-yard loss on a sack of a scrambling Meadows in the fourth quarter.

Although the Bulldogs ran the ball 26 times, several of those rushes we the result of Meadows being flushed out of the pocket.

“We did a great job up front,” Fountain said. “Our defensive line and linebackers fought hard to get to the quarterback all night.”

Pike County, a team expected to spread the ball around in Class 3A, was only 10-26 passing for 106 yards.

Charles Henderson will look to kick off the 2011 regular season with the same positive tones against Beauregard Aug. 26 at Movie Gallery Stadium.

The Trojans defeated the Hornets 27-12 last season on the road.