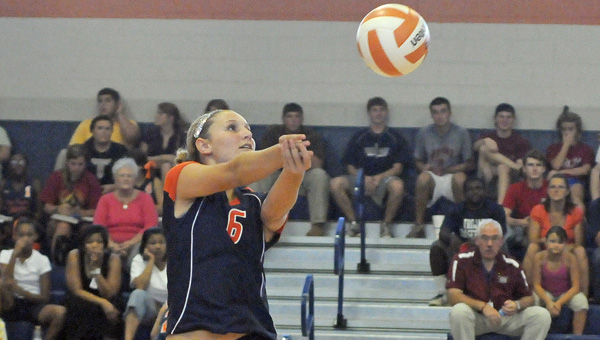 Charles Henderson (0-1) got off to a rough start despite spirited play that impressed head coach Jennifer Sikes.

“Our girls came out and hustled like I haven’t seen them hustle before,” she said. “Obviously it wasn’t enough to win but the effort was good to see.”

The Trojans were led n the match by Olivia Hudson with six points.

Alli Ellis gave the Trojans their only ace of the match and also had three points.

“We had some amazing rallies,” Sikes said. “We’ve got to play better as a team and we will.”

While the Trojans have experience and chemistry their coach feels it has not all come together for her team early in the 2011 season.

“We have four seniors and several juniors,” said Sikes. “They’ve played together for a while. It’s just early and we’ll get better.”

The coach also mentioned her pleasure with the her teams defensive play.

“We made the work. We got into good position but couldn’t seem to make enough plays.”

Sikes admits the Trojans have work to do but also credited their opponents hard work for Monday’s result.

“Ariton has done a great job at improving,” Sikes said. “They looked like a different team than last year.”

Charles Henderson will travel to take on Highland Home tonight the junior varsity team will kick off the match at 4:30 p.m.

On Thursday, the Trojans will host a tri-match with Eufaula and Pike County participating before heading to the heart of the Wiregrass for a tournament at Dothan High School on Saturday.

Charles Henderson will face Ariton in a rematch later in the season on Sept. 12 on the road.