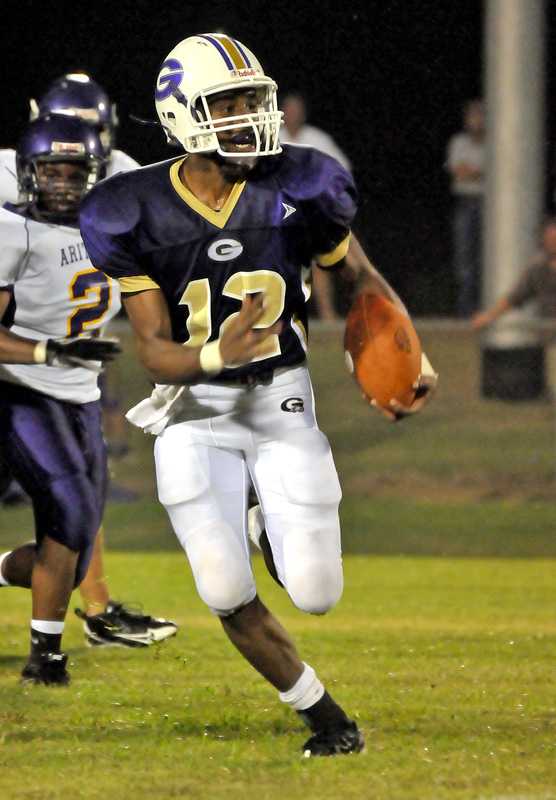 GOSHEN – The Goshen Eagles knocked off pre-season rust in a 14-all tie in two quarters of jamboree-style football at the Eagles Nest.

“We were coming into the game knowing we had areas to work on,” said head coach Bart Snyder. “There are some things we have to fix and some adjustments to make but more than that we have to develop a better attitude about what we can do.”

What Snyder and his coaching staff did learn about this year’s Eagle crop was that senior quarterback Jerome Lawrence is a leader – and a runner. Lawrence had four carries for 80 yards and a touchdown in the first half.

“Jerome has leadership and (senior) Brandon Alford is there too, and we had some good blocking but that is going to have get much better,” Synder said.

Reginald Foster, mostly shut down by the Purple Cats, still managed to post 80 yards on just four carries and a touchdown.

Coach Rudi Free’s Purple Cats drew first blood with under a minute left to play in the first quarter of varsity action and controlled the ball for a little under half of the 12-minute quarter. That seemed all that was needed to light the Eagle’s offensive fires.

Just over two minutes into the second varsity quarter, Lawrence broke a 68-yard run for pay dirt. The lead would be short-lived.

On Ariton’s next possession, a couple of short carries and pass reception on near the Eagle 5-yard line, combined with a pass interference call against Goshen to put the Purple Cats on the Eagle two.

With 4:31 left to play, Ariton punched into the end zone. The Eagles answered back at 15 seconds latter with Foster posting a 37-yard carry to put Goshen back in striking distance only to see the drive end on an interception at the Ariton 22-yard line. In the two quarters, Lawrence was 0-4 passing.

“You see you have got to put extra effort into it,” Snyder told his team in the post-game wrap-up. “Nothing is coming easy – you have to find it in heart and bring it to the field.”

Snyder said he would be focusing on making adjustments in the offensive line and linebackers and continue focusing on fine-tuning game plans next week as he prepares the Eagles for regular season play at G.W Long Thursday night.