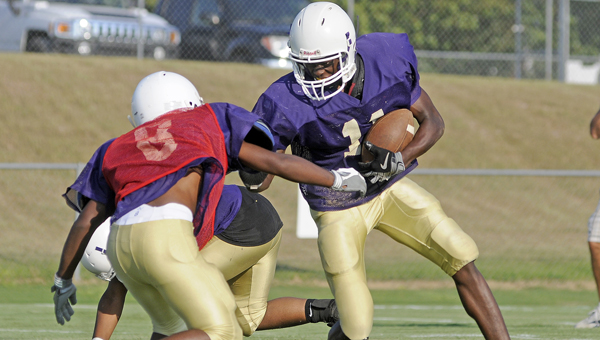 GOSHEN – All of Goshen’s coaches knew what kind of upperclass talent they had returning. They also knew they had some younger players that could contribute. What they weren’t expecting was for them to stand out the way they did in Tuesday’s scrimmage at Eagle Stadium.

Freshman Jeremy James intercepted a pass early and sophomore Deangelo Orum had some quality plays for the Eagles showing head coach Bart Snyder that he will have some young cards to play come Aug. 25.

“Jeremy did a good job doing what coach (Pate) Harrison has taught him,” Snyder said. “He took the right steps and made a good play on the ball.”

Several young players held their own against the Eagles staring offense leaving Snyder satisfied that when needed he can call on his younger players to produce.

“It was good to see that we have other guys coming along that we will be able to put in.”

Goshen worked mostly on their passing game and getting their personnel settled before Friday’s jamboree game with Ariton.

“I saw a lot of areas we need to work on,” said Snyder. “Our passing game needs some work especially.”

“Obviously, that’s where it all starts,” Snyder said. “We’re going to run the ball but we’ve got to be able to throw it as well.”

While Reginald Foster took the majority of the carries for the first team offensive, Shannon Sellers and PJ Fannin also received quality time carrying the rock for the Eagles.

Snyder talked about constructive criticism after the scrimmage and challenged his players to work on their own and push one another away from the practice field.

“That’s what coaching is all about guys,” Snyder told his players.

“We are trying to help make you better ballplayers. We’ve got a lot of good leaders on this team and you have got to take pride in what you do.”

Snyder also saw a diamond in the rough defensively in junior Delaney Allen.

“I told the guys that someone was going to step up and show that they wanted to play and Delaney did that.”

Allen lined up at nose guard at disrupted the offense’s snaps all afternoon. He was also credited with a sack.

“He caused havoc on our centers and showed us he really wanted to be in there.”

“We’ve got six (practice) days going into our regular season and we’ll meet again as a coaching staff and get everything set,” Snyder said.

Coming into 2011, Snyder feels his team will benefit from last season’s disappointing 48-26 loss to Mobile Christian in the first round of the Alabama High School Athletic Association playoffs.

“I think we learning a lot about ourselves that game,” said Snyder. “There’s no doubt we overlooked them and we want to make sure we never overlook anyone.”

With many uncertainties in Goshen’s depth chart, Snyder can rely of a couple of guys to step up a leaders for the Eagles. Both quarterback Jerome Lawrence and running back Reginald Foster had a good scrimmage for the Eagles with both showing game-changing abilities in both the passing and ground game.

Foster had several carries go for big yardage showing his power and agility along the way.

Lawrence made a few mistakes delivering the football but connected on a beautiful fade route with Orum to end the day’s action.

Goshen will tee it up with Ariton Friday in their final tune up before traveling to take on G.W. Long to kick off the 2011 season in Skipperville.