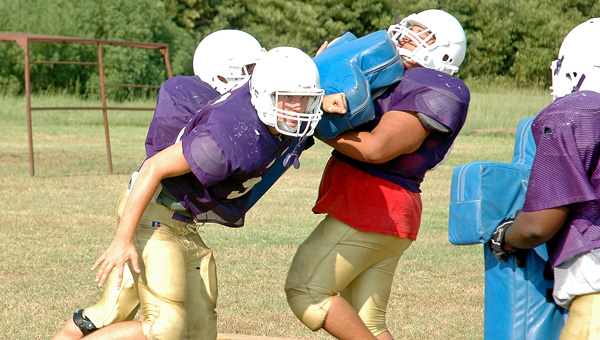 They may not be the biggest or the strongest but that’s just the way they like it at Goshen. The Eagles’ offensive line doesn’t need five 6-foot 5-inch hogs to run their offense successfully, they need quickness and speed.

“We are looking to use sound technique and the fundamentals on the line,” offensive coordinator John Williford said. “We’ve got a quick running back and quarterback so our lineman need to be quick as well.”

While the Eagles don’t have the most experienced bunch up front their hard work is where head coach Bart Snyder sees promise.

“Those guys work now,” Snyder said. “With coach Williford over there they can’t help but work.”

Goshen lost their top lineman from a year ago in Jeffery Long and will look at several potential suitors as his replacement.

Austin Missledine will be looked at seriously by the coaching staff as a young prospect. The freshman is a recent transfer and could see significant playing time for the Eagles.

Another key component to Goshen’s line is Jonathan Thomas. Thomas will anchor the line at center and provide senior leadership. Also, look for Joey Faulkner to see action snapping the ball.

One of the Eagles sleepers is Trey Adams. Adams has the build to dominate up front and coaches have been working on technique all summer. If everything clicks, Adams could shine for Goshen in 2011.

“We’ve worked a lot with Trey to get him ready,” said Williford. “He’s got the potential to be very good for us.”

Lorenzo Merritt, Shannon Sellers, and Duston Long round out the line for the Eagles. All three will play both ways for Goshen so expect to see some rotating.

The Eagles ground game with Reginald Foster and Jerome Lawrence will call for explosiveness off the ball. Snyder feels that while experience may be a factor early, their athleticism will pick up the slack.

“You can’t coach experience but we’re working really hard on the line and we’ll work until we get it right.”

That was evident at practice Thursday when Snyder delayed moving into full offensive practice to work with Williford specifically on the offensive line.

“It’s like a link,” Williford said. “On offense if one guy does it right and another one doesn’t the link is broken and the play fails.”

Goshen will look to keep the link together as they take to the field for their first scrimmage next week before kicking things off with G.W. Long in Skipperville on Aug. 25. The Eagles defeated Long 45-24 a season ago but Snyder feels this may be the toughest schedule he’s faced.

“There are no weak spots in our schedule, everyone is tough,” he said. “We’ve got to worry about getting ourselves ready for every week.”