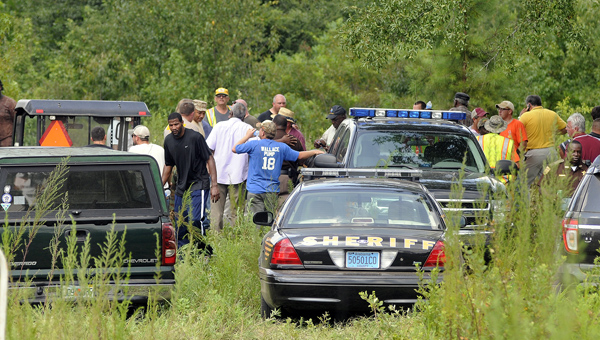 Searchers gather near the area where missing 70-year-old Deanna Walton was found near Grace Road in Troy, Ala., Monday, Aug. 8, 2011. Walton was found Monday afternoon after disappearing on Saturday. (Messenger Staff Photo/Thomas Graning)

Deanna Walton, 70, an Alzheimer’s patient, was found in thickly wooded area near Grace Road in Troy. Walton was last seen between 1 p.m. and 1:30 p.m. on Saturday.

Community members and members of several agencies had gathered Sunday night in prayer.

“There were a lot of prayers that went up. We had churches praying for us, we had community members. The family, community members, and sheriff deputies held hands (Sunday night) at Union Hill Church  and prayed. Prayers worked,” Thomas said Monday afternoon. “It was teamwork.”

According to Thomas, Walton’s skirt was found near the edge of the woods on Monday morning.

“We identified the skirt, and I felt real good that she was in the area,” Thomas said.  “A construction crew saw her come in about 1 p.m. Saturday, but never saw her leave when they left at 5 p.m.,” Thomas said.

“Everyone was determined to find her alive.”

Walton was found about 150 yards from the skirt, and about 100 yards into thick woods.

According to Thomas, Walton was in good health and talkative when found. She was taken to Troy Regional Medical Center by Care Ambulance to be checked and treated for dehydration.