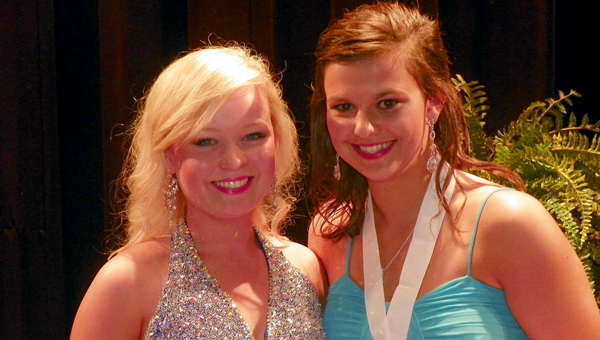 Conleigh Gilmore, first runner-up, and Carla Faulkner, Pike County's Young Woman of Distinction for 2011, pose together after the competition on Saturday. (Submitted Photo)

Carla Faulkner of Goshen was crowned the Distinguished Young Woman of Pike County Saturday night at the annual program at the Claudia Crosby Theater.

“This was the first time that a young woman for Goshen has won the title since the Junior Miss Program began in Pike County in 1976,” said Cathy Brunson, chair of the Distinguished Young Woman of Pike County board. “We share the excitement of the Goshen community in the awarding of the title. Carla had a huge following Saturday night and everyone was thrilled when she was crowned. She will be an outstanding representative for all of Pike County and she will represent us well in the Distinguished Young Women of Alabama program in Montgomery in January.

On a personal level, Faulkner was “very excited” to win the title of Distinguished Young Woman of Pike County but, on a broader scope, she was just as excited to bring the title home to Goshen.

“Winning the title is a great honor and it put Goshen back in the program,” she said. “I’m very honored to represent Pike County in such a great program.”

Faulkner said the program has many benefits and she hopes to inspire other girls to participate in the program.

“I think the reason so few girls participate is because of the talent competition,” she said. “Some girls think they don’t have anything to do but there are different kinds of talent. Everybody has something they can do and the program is such a good experience.”

Faulkner said the opportunities to learn more about Pike County, to be involved in the county’s many activities and events and to meet more people are the reasons she wanted to participate in the Distinguished Young Women of Alabama program.

“I’m really looking forward to representing Pike County in the state program in January,” she said. “I’ll be a little nervous being away from home for 10 days but I’ll also be very excited. I know that I’ll enjoy meeting new people and doing all the fun things that will be planned for us.”

Faulkner’s senior year at GHS will be an especially busy one with her added responsibilities as its Distinguished Young Woman. She is involved in school, community and church events.

She is secretary of the Goshen FFA, a member of the GHS Yearbook staff, Key Club, Pep Club, the Horse Judging team. She is also an AIM mentor and an honor roll student.

Faulkner was president of her freshman, sophomore and junior classes and represented GHS at the SAECs Montgomery Youth Tour.

She is captain of the Troy School of Dance and the Arts Company, a top finisher in the national KAR dance competition, a Pike County Junior Ambassador and a member of the Henderson Baptist Youth Group.

After graduation, the Distinguished Young Woman of Pike County plans to attend George Wallace Community College and earn a physical therapy assistant’s license. Her future plans are to become a physical therapist.

Faulkner’s parents are Kim Faulkner and the late Johnny Faulkner. She has two brothers C.C., 21, and Joey, 15.